Ms Yeo, who was usually tight-lipped about her relationship with Mr Lee, revealed how he asked for her hand and recalled several occasions and earlier periods in her life when she could have met her husband.

"I grew up in an oil palm estate called Gomali Estate, where my mother worked as a clerk. When I was in kindergarten, Gomali Estate was bought over by his father's company. He grew up tagging along with his father on frequent visits to the clusters of estates in the area, including Gomali Estate. We didn't meet. Or did we?" she wrote.

"Growing up, I loved going to Paya Lang Club which is nearby to Gomali to swim during the weekends, (it was one of the employee benefits), and he loved to stop by for ice-cream at the club whenever his father took him to visit the estates. We didn't meet. Or did we?"

Ms Yeo revealed she received academic awards from her father-in-law and her husband's elder brother when she was a young student as her father-in-law's company rewards estate employees’ children who did well in major exams.

"We still didn't meet. Or did we?" she continued in her post.

"Then one day, the stars aligned. We met. And things amazingly fell into place. On 3rd January 2019, he proposed to me during a punting tour at my dream university and alma mater, Cambridge University, in the most unexpected way." The post was accompanied by a picture of Ms Yeo and Mr Lee speculated to have been taken at the UK university on the day of the proposal.

Said Ms Yeo: "I've lived a fulfilled and happy single life for 35 years, free to pursue my dreams; today I made a covenant before God that I'll be with this man for as long as we live, in good and bad times, in sickness and in health, as the Bible says, "Two are better than one... If either of them falls down, one can help the other up."

Quoting from the bible, she said: "Love is patient, love is kind. It is not self-seeking, it keeps no record of wrongs. It always protects, always trusts, always hopes, always perseveres. 1 Corinthians 13."

Within hours after going online, the post received some 18,000 likes with 1,200 shares. Many congratulated the newlyweds and wished them well.

The couple registered their marriage on March 11. 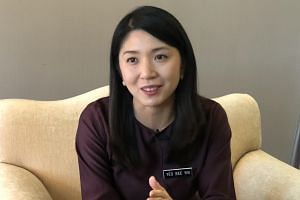 Tan Sri Lee, 72, is one of Malaysia's richest men.

Forbes listed him as Malaysia's fourth-richest, with a net worth of US$5.2 billion (S$7 billion).