BANGKOK - A powerful bomb exploded during rush hour right outside the famed Erawan Shrine next to the Grand Hyatt hotel in downtown Bangkok on Monday, killing at least 16 people, in the most severe single incident of this kind to hit Bangkok in recent memory.

The Straits Times' Thailand Correspondent Tan Hui Yee was told by the Singapore Embassy in Thailand: "We understand that some Singaporeans have suffered injuries."

The embassy is still trying to find out more details.

The Thai police have reported that among the people killed were four foreigners, including at least one from China and one from the Philippines.

Most of the injured were tourists from China and Taiwan, other media reports said.

The Straits Times's Indochina Bureau Chief Nirmal Ghosh, who is at the site at the Ratchaprasong intersection, saw at least six motorbikes lying around a crater, under huge floodlights in the middle of the intersection.

A body severed in half was also seen lying on the sidewalk 30m from the explosion site. Body parts were scattered across the street, and about 40 vehicles were damaged.

Bodies lying under sheets were also seen in Erawan Shrine.

Eyewitnesses say that the bomb that went off was on a motorcycle, 5m to 20m in front of the shrine. There was shattered glass for 50m around the blast site.

The blast radius was about 30m to 40m. The police put a cordon of 50m, pushing onlookers far behind the barriers, Mr Ghosh reported. The area was ringed by the police and ambulances with flashing lights.

The bomb went off outside the Erawan Shrine in the downtown Chidlom district of the Thai capital.

A police officer also told The Nation that there was another bomb that exploded, made of 5kg TNT explosives and hidden under a roadside bench.

"Our initial findings are it is a bomb," Thai police chief Chakthip Chijinda told Channel 9 television. "We are checking to see if there is a second bomb."

"All I can say now is there has been an explosion in central Bangkok involving a motorcycle bomb," deputy national police chief Aek Angsananond told Reuters.

"I can confirm it was a bomb, we can't tell which kind yet, we are checking," national police spokesman Lieutenant-General Prawut Thavornsiri told AFP.

Thailand's Defence Minister told AFP that those behind the bomb wera aiming at "foreigners" to try to damage the tourism industry.

"It was a TNT bomb... the people who did it targeted foreigners and to damage tourism and the economy," AFP quoted Mr Prawit Wongsuwong as saying.

Bloomberg reported that Thai Prime Minister Prayut Chan-o-cha was aware of the blast, and will monitor the situation closely, according to government spokesman Werachon Sukondhapatipak.

The government would set up a "war room" to coordinate the response to the blast, the Nation quoted General Prayut as saying.

The Bangkok Post reported two bombs had exploded. It also said that two explosive devices were detonated by the bomb squad.

One of the deactivated bombs was found near Gaysorn Plaza at the Ratchaprasong junction. It has been deactivated, according to reports. 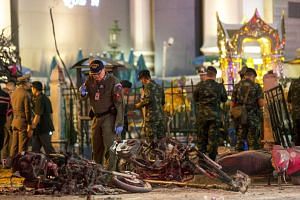 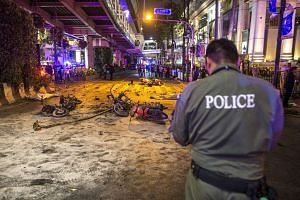 The police and ambulances rushed to the scene after the bomb went off at around 7pm local time. 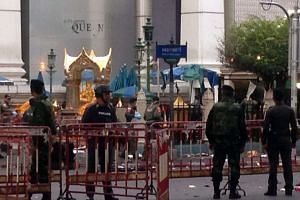 A timeline of past bomb blasts in Bangkok

The Nation also reported that volunteer translators, especially those who can speak Chinese, are needed at Bangkok hospitals, as many of the injured are tourists.

A BBC journalist at the scene said there was chaos in the area.

He added that he has seen massive damage as well as a crater - indicating a bomb, which is rare for the city.

People around the shrine were hit by the full force of the blast, he said.

Nobody has come forward to claim responsibility yet.

Thailand is fighting a Muslim insurgency in the country's south, but these rebels have rarely attacked outside their ethnic heartland.

The Erawan is an enormously popular shrine to the Hindu god Brahma, but is visited by thousands of Buddhist devotees every day.

It is located on a main road through Bangkok's commercial hub and is surrounded by three major shopping malls. It is also next to the five-star hotel Grand Hyatt.

The Ratchaprasong intersection has been the centre of political demonstrations in recent years.