KUALA LUMPUR (THE STAR/ASIA NEWS NETWORK, BLOOMBERG) - The corruption trial of former Malaysian prime minister Najib Razak is expected to start on Wednesday (April 3) despite a last-minute attempt by him to postpone the proceedings.

Najib is facing seven charges of criminal breach of trust and abuse of power involving RM42 million (S$13.94 million) in funds belonging to SRC International, a former unit of troubled state investment fund 1Malaysia Development Berhad (1MDB), which is currently at the centre of a globe-spanning investigations involving about US$4.5 billion (S$6.1 billion) of allegedly misappropriated funds.

The seven charges are the first set of charges to be tried in court out of the 42 counts of corruption and money laundering charges levelled against Najib. He has pleaded not guilty to all the charges.

“This is likely to be the mother of legal battles in Malaysian history,” said Mr Yang Razali Kassim, a senior fellow at the S Rajaratnam School of International Studies in Singapore. “It’s going to be tough. This growing array of charges also means it will take more time to wrap up the legal fight.”

The Kuala Lumpur Court Complex is expected to be swarmed by local and international media for the trial.

Political analysts said the trial of Malaysia's former premier would be a landmark event for the country not just legally but also politically.

The Pakatan Harapan (PH) coalition swept to power at the general election last year, fuelled in part by voter anger over the 1MDB scandal.

Universiti Malaya political analyst Muhammad Asri Mohd Ali said sympathy or support for Najib could grow if the public perceived that the prosecution had not presented enough evidence during the trial. 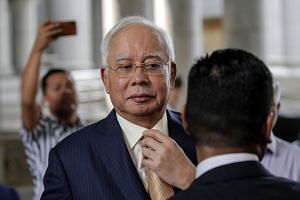 He also believed the trial would not limit Najib's ability to continue engaging the public through attending events such as those organised by non-governmental organisations.

"The trial will not tie Najib down and I don't think it will curb his political activities," he said.

The trial was originally slated on Feb 12 but was postponed because of appeals over procedural matters raised in pre-trial hearings.

Last week, a judge ruled that the trial should proceed.

However, Najib, 66, filed a judicial review on Monday against the decision not to grant him a stay on the upcoming proceeding.

Mr Harvinderjit Singh, one of Najib's lawyers, said the application was filed at the Federal Court.

He said the review will be heard before a panel at the Federal Court on Thursday.

As such, Najib's trial will proceed as planned. The Star said the prosecution has 63 witnesses on its list so far.

The prosecution has also submitted more than 3,000 documents, including SRC International's meeting minutes, witness documents and other related documents, to the defence.

Najib's supporters are expected to come in droves to show their support for "Bossku" (our boss), a slang originating from Sabah that Najib has adopted.

On Tuesday,  Najib's daughter Nooryana Najwa paid tribute to him on her Instagram account, saying that she, along with his supporters are praying for him.

She also said the upcoming trial will be an opportunity for the former premier to vindicate himself.

“Most of us can afford to fail in private. You had to fail in public. But, that just also means while most of us rise up alone, you get to rise up in the eyes of millions. For every dozen who rejoice at shaming you, there are hundreds who stand with you."