Datuk Seri Anifah said he would remain neutral in Parliament and support the current government’s moves to restore Sabah and Sarawak as equal partners in the federation as announced by Prime Minister Tun Mahathir Mohamad on Malaysia Day.

“I am doing it for Sabah. I know if I stay in Umno, I will be subject to party whip to vote against any Bill the current government tables to restore our rights," the MP for Kimanis in Sabah said.

“If I vote against the party whip, I will face disciplinary action. I have decided to leave the party and remain independent to support moves by the current government to restore Sabah rights,” said the former foreign minister, who is the younger brother to former chief minister Tan Sri Musa Aman.

“My conscience tells me that I have to protect Sabah interests, and I am ready to provide Pakatan Harapan the two-thirds needed for restoration of Sabah rights,” he said.

Mr Anifah said he had always supported state rights under the Malaysia Agreement restoration agenda in the Barisan Nasional government and was ready to assist Sabah irrespective of political difference.

He also said that he was not a part of any group planning leave Umno and denied his decision was linked to former International Trade and Industry Minister Mustapa Mohamed’s decision to leave the party on Tuesday.

Datuk Seri Mustapa had said that he was quitting Umno after more than 40 years of service to the party as he felt that the party's current direction is no longer in line with the political principles he upheld and there was hardly any convincing efforts to start rejuvenating the party.

"Based on this, after much reflection and deep thought, I have decided to resign as Umno member after more than 40 years of providing service to the party," said Mr Mustapa, who is Umno supreme council member the MP for Jeli in Kelantan. 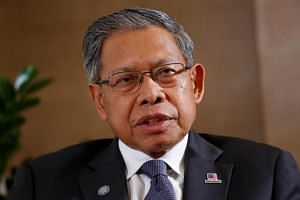 100 days under Pakatan: Tough times for Umno in the opposition

Mr Mustapa said that after the 14th general election, he had made several observations on Malaysia's political landscape, Umno, Barisan Nasional and the country's direction.

"Based on the latest developments, I feel that it was getting difficult to salvage the diminishing trust deficit and Umno's image.

"There is no sign that the majority of the multiracial and multi-religious society will once again trust the party's struggles," he added.

Mr Anifah's departure is likely to see more Sabah Umno MPs leaving the party, though many of those thought to be on the way out could not be reached.

Sabah Umno won eight MP seats in the general election in May, and Mr Anifah is the first to leave.

Kinabatangan MP Datuk Bung Mokhtar Radin, who is not close politically to Mr Anifah, has also indicated that many more MPs would be leaving.

Sabah Umno is now led by Sulaman assemblyman Hajiji Mohd Noor, who could not be reached for comments on Anifah's resignation.

Sabah Umno, which won 17 state seats, has already lost seven assemblymen who decided to move to an independent position, while some joined the ruling government’s Parti Warisan Sabah, Upko and PKR.

Though Mr Anifah is insisting that he would be independent, there is political talk that Sabah Umno leaders led by Datuk Seri Hajiji is likely to reshape itself into a new Sabah-based party with or without Umno’s blessings.

They are said to be planning to pursue their political struggle through Gabungan Bersatu Sabah, which currently consists of Parti Bersatu Sabah and Parti Solidartiti Tanah AirKu (Sabah STAR).