GEORGETOWN (THE STAR/ASIA NEWS NETWORK) - Datin Seri Rosmah Mansor, the wife of former Malaysian prime minister Najib Razak, may face another round of questioning - with the police this time, after her 13-hour marathon session with the Malaysian Anti-Corruption Commission (MACC) on Wednesday (Sept 26).

She will be called in by the police to facilitate the ongoing money laundering investigation into the troubled state fund 1Malaysia Development Berhad (1MDB).

Deputy Inspector-General of Police Noor Rashid Ibrahim said Madam Rosmah would be required to verify jewellery said to belong to her that was confiscated.

"We confiscated the items at former prime minister Datuk Seri Najib Tun Razak's house and at an apartment unit in Pavilion Residences. Rosmah will be called again, as the seized jewellery pieces are alleged to be hers."

"We will need her to identify and confirm the items. It is expected to be a long process, as there are many of them and we need to trace them back to the sellers and producers," said Tan Sri Noor Rashid during a press conference on Thursday (Sept 27).

He also said Najib would be facing several other charges relating to 1MDB, adding that police were still carrying out investigations.

Many more investigations into the case had not been completed at the moment, he said, adding that they would take some time. 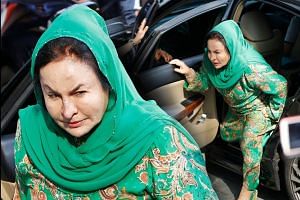 "Yes, there will be more charges (in court) against Najib because many more investigations are being carried out on him, including under Section 409 of the Penal Code (breach of trust) and the Anti-Money Laundering, Anti-Terrorism Financing and Proceeds of Unlawful Activities Act 2001 (AMLATFA).

"As I said earlier, the case needs close scrutiny because some of the evidence is abroad and we need to go through the Attorney General's Chambers to obtain it.

"The countries involved are Switzerland, Singapore, America and two or three other countries. We have already contacted their respective Attorney Generals and a discussion has been carried out, but the investigation will take time," he said.

Commenting on Umno's application at the Kuala Lumpur High Court to reclaim the RM116.7 million (S$39 million) cash seized from Pavilion Residences in June, Mr Noor Rashid said police still had more than half a year to hold on to the cash.

"The Anti-Money Laundering, Anti-Terrorism Financing and Proceeds of Unlawful Activities Act provides a one-year period for police to hold on to evidence on the case.

"The court can decide whether to take action on the money under criminal proceedings or under civil forfeiture after that.

"Police have up to one year to complete the investigations under the law.

"Once the money laundering investigation into 1MDB is completed and if police find no links to the money, we will gladly return it to the owner.

"Based on the investigations so far and the statements recorded, we believe the money was acquired through unlawful means.

"We will need time to verify all items seized pertaining to the investigation, as the scale of the case is huge," he added.