KUALA LUMPUR (THE STAR/ASIA NEWS NETWORK) - Former Goldman Sachs banker Roger Ng has been arrested and will be extradited in connection with the 1MDB investigation, the Malaysian police revealed.

Commercial Crime Investigation Department (CCID) director Amar Singh said Ng was detained in Malaysia on Thursday (Nov 1) to assist in the probe by the US Department of Justice (DOJ).

"We served the warrant of arrest put out on him. The extradition process is ongoing and he will be extradited once everything is settled," Amar said on Friday.

Fugitive businessman Low Taek Jho and bankers Ng and Tim Leissner were indicted by the US DOJ on Thursday for conspiring to launder money and violating the Foreign Corrupt Practices Act in relation to 1Malaysia Development Berhad (1MDB).

Leissner pleaded guilty to conspiring to launder money and to violating anti-bribery laws. He has been ordered to forfeit US$43.7 million (S$60 million) as a result of his crimes. The charges relating to 1MDB are the first by DOJ.

In 2016, the DOJ reportedly recovered over US$1 billion that was allegedly stolen, and sought the forfeiture of property including a Bombardier private jet, Manhattan penthouse, Beverly Hills mansion and paintings by Vincent Van Gogh and Claude Monet. 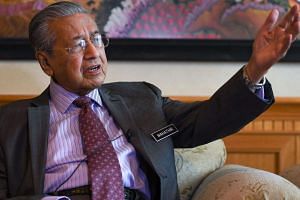 This is the second time Low is being charged over 1MDB.

Malaysian police filed the first set of criminal charges on Aug 24 against Low and his father Larry Low Hock Peng over money allegedly stolen from 1MDB.

The money laundering charges were brought against the father and son "in absentia" by the CCID and the Attorney-General's Chambers.

Warrants of arrest for both men were also sought.