LANGKAT/IJOK, INDONESIA (AFP) - Indonesian oil palm farmer Kawal Surbakti says his livelihood is under attack, but the threat is not from insects or hungry orang utans eating his prized crop.

Half a world away, the European Parliament is moving to ban the use of palm oil in biofuels, while British grocer Iceland has announced it will stop using the commodity over concerns that it causes widespread environmental destruction.

Losing the key European market worries small farmers like Mr Surbakti and millions of others in Indonesia and neighbouring Malaysia - the world's top two producers - as prices drop for an oil found in everything from biscuits and sweets to cosmetics and vehicle gas tanks.

"Before, I could save up a little money but now I can't even do that."

Across the Malacca Strait in Malaysia, grower Mohamad Isa Mansor issued a dire prediction as he plucked reddish-orange fruits from his trees.

"If the European Union (EU) succeeds in the ban, I'm dead," he said at his small plantation in the coastal town of Ijok.

"Without this crop, we will be living in poverty. It is the source of income for thousands of people (here)," he added. 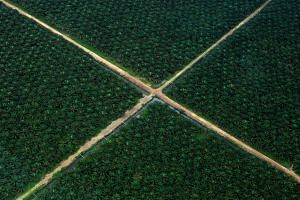 Europe is one of the world's biggest palm oil consumers, along with India and China.

About half of the palm oil used last year in Europe was for biofuels that ended up in gas tanks, according to environmentalists.

Indonesia and Malaysia have threatened retaliatory sanctions on European products over the proposed palm oil ban, which calls for a complete phase-out from biofuels by 2030. The legislation is awaiting a final vote and member-state approval.

As the diplomatic row smoulders, Indonesian grower Selamet Ketaren says he and other small farmers - the backbone of the industry - are pawns at the mercy of land-clearing multinational firms that buy their crops.

"Smallholder farmers like us are just victims of the big corporations," said Mr Ketaren, who has been growing oil palm since the mid-80s.

Critics say that oil palm development also contributes to climate change through deliberate forest-clearing fires, which release carbon dioxide into the atmosphere and lung-clogging smog into the region's air.

Many under-pressure firms made "no deforestation" pledges, but activists say they are tough to monitor and frequently broken in the vast jungles of Sumatra and Borneo island.

This week, Greenpeace said a group of Indonesian palm oil firms that supply major international brands including Unilever and Nestle have cleared an area of rainforest almost twice the size of Singapore in less than three years.

But Malaysian farmer Mansor rejects the depiction of growers as an environmental threat.

"(The EU) says we cut down the forest. But my land is on peat soil - there was rubber growing here before," he said.

"How can the EU claim that I'm killing the earth?"

An EU ban would threaten the livelihoods of 650,000 smallholders and over 3.2 million Malaysians who rely on the industry, according to the Malaysian Palm Oil Council.

"The policies that the EU is proposing to introduce will harm Malaysia's rural communities and reduce incomes for Malaysian families," said Mr Douglas Uggah Embas, deputy chief minister of Sarawak state on Borneo island, home to many smallholders.

Some three million people in Indonesia - the world's biggest palm oil exporter - are estimated to be working in the sector and many more depend on their income.

While it hopes to tap other markets, the Indonesian Palm Oil Association said that a slowdown in China and "negative campaigns" against palm oil could hurt the bottom line.

Malaysian grower Muhamad Ngisa Kusas fears that political decisions made in Europe will lead to poverty, crime and could push desperate people into the arms of religious extremists in the two Muslim-majority countries.

"If the EU bans comes into effect, the price of palm oil will surely plunge. Then we smallholders are doomed," said the 78-year-old.

"The EU had better think very carefully about this action."