Facing a challenge from a self-proclaimed nationalist, President Joko Widodo has used speeches after his nomination for April's vote to tout his success in wresting control of the nation's prized natural resources from foreign companies.

Now the campaign in the lead up to the April 2019 poll is expected to develop into a battle built around economic nationalism. While it may risk a retreat by foreign investors from South-east Asia's biggest economy, it's still likely to be a vote winner, according to analysts.

Widodo, known as Jokowi, has carried forward the resource nationalism championed by his predecessor Susilo Bambang Yudhoyono by taking steps to take back assets managed by multinationals such as Freeport-McMoRan Inc., Total SA and Chevron Corp. His government recently ordered all oil producers to sell their crude to state refiner PT Pertamina as it sought to cut imports.

Jokowi is pitted against Prabowo Subianto, a former general and the chief of the opposition Gerindra party, in a rematch of the 2014 elections. As Jokowi struggles to meet his 7 percent growth target and defend the rupiah that has slumped to the lowest level since the Asian financial crisis in 1997-98, he's likely to raise the pitch of nationalist rhetoric.

"We maintain our sovereignty, we guard our natural resources," the president said. "We want to use that as much as possible for the prosperity of the Indonesian people."

Resource nationalism "might be deemed unfriendly for investors, but looking at the consistency in the past years, the trend will likely remain in years to come," said Komaidi Notonegoro, executive director of Jakarta-based ReforMiner Institute.

"There has also been a shift in our investment paradigm from pro-market to economic independence."

The pull of protectionism has characterised Jokowi's tenure since 2014, when he became the country's second directly-elected president. Indonesia, rich in natural resources from tin to nickel and copper to natural gas, is keen to keep more of that wealth for the benefit of its 265 million people by restricting exports.

After filing his nomination for re-election on Aug 10, Jokowi told his supporters he had protected the national interest by securing control of Grasberg copper and gold mine operated by Freeport and Rokan oil and gas field from Chevron. While Grasberg is the world's second-largest copper mine, Rokan is Indonesia's largest oil block.

Subianto and his running mate Sandiaga Uno have echoed similar nationalist sentiments. The duo have pledged to preserve Indonesia's wealth for its people and not allow other nations to exploit it.

"Indonesia's wealth is for the people of Indonesia, not for other nations - we do not want to be a minion of other nations, become a lackey and slave to other nations," Subianto said last month.

Still, the government insisted the takeover of oil and gas fields was not nationalism.

"If the foreign companies made better offers, we would give the blocks to them," Djoko Siswanto, the director-general of oil and gas at the energy ministry, said. "This has nothing to do with nationalization. This is all about the economics." 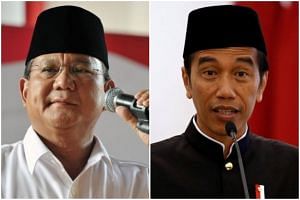 Battle for Java as Indonesians vote in regional elections

Rising foreign direct investment since Jokowi became president indicates that investors consider the world's fourth-most populous country as too big a market to ignore. Annual foreign investment jumped 13 per cent in three years to US$32.2 billion in 2017, official data show.

"Nationalist rhetoric is definitely a 'vote getter' in Indonesia where foreign investment is viewed by most people as either a bad thing or, at least, a necessary evil that must be strictly controlled," said Bill Sullivan, a lawyer specialising in mining at Christian Teo & Partners in Jakarta.

"I expect a repeat of the 2014 presidential election when every political party and politician sought to stake out the most extreme resource nationalist position possible."

BHP, Newmont Indonesia banned metal ore exports in 2014 to encourage smelter construction, arguing that too much wealth was shifting to refineries overseas. The move led to mine closures and a global surge in nickel prices.

Newmont Mining Corp. and BHP Billiton Ltd. both pulled out of Indonesia in 2016 by selling their mining assets to local players. The ban has since been relaxed to allow some exports.

Investors are bracing for the takeover of more oil and gas assets, where current contracts are due to end in the next few years and will cost the government very little to acquire, Notonegoro said.

"It's different in the mining sector because when a contract expires, the government has to pay some compensation to take over the mining asset, like in Freeport case," he said.

The nationalistic drive has led to state-owned companies dominating the resources sector. PT Indonesia Asahan Aluminium is in the final stages of taking a majority stake at Grasberg valued at about US$3.85 billion, while Pertamina took over Mahakam and Rokan oil blocks from Total and Chevron respectively.

Yet allowing state-owned companies to dominate the energy or mining industry will, based on their past track record, encourage corruption, inefficiency and political interference, said Sullivan from Christian Teo & Partners.

That will reduce the competitiveness and make "world class western energy or mining companies reluctant to invest in Indonesia."