BENTONG (THE STAR/ASIA NEWS NETWORK) - While some workers involved in the East Coast Rail Link (ECRL) are in shock over the deferment of the project as announced by Prime Minister Mahathir Mohamad, some areas have yet to see any work despite the launch of the 688km line about a year ago.

Several construction workers said they were left in the dark over the matter.

"Right now, we don't know what the actual status of the project is. We are still waiting for an announcement from the top management," a senior construction worker told The Star on condition of anonymity.

"Workers from China comprised 18 to 20 per cent of the staff," he said.

Tun Mahathir announced on Tuesday that two Chinese mega projects in Malaysia would be deferred, with Beijing's agreement.

He was referring to the US$20 billion (S$27 billion) ECRL and two gas pipelines worth US$2.3 billion.

"It will be deferred until such time we can afford, and maybe we can reduce the cost also if we do it differently," Dr Mahathir said.

A security guard at the Bentong ECRL project site said the workers' quarters were already deserted a month ago.

In July, Singapore's Channel NewsAsia reported that the fallout had been half of the workforce, mostly Malaysians, being retrenched.

A source from the Malaysian Rail Link (MRL), the project owner of ECRL, confirmed that the retrenchment did indeed take place.

"The China Communications and Constructions Company (CCCC) started layoffs a month ago when the project was suspended. 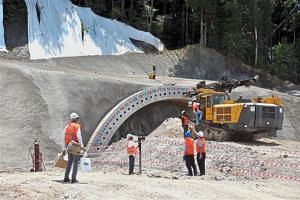 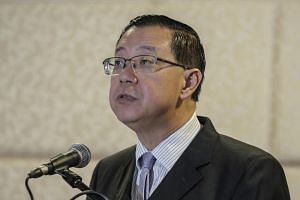 "Half of them are already retrenched and the Chinese workers were told to leave," said the highly placed source.

Top officials in the MRL are said to be shocked by Dr Mahathir's announcement, as it was understood that they were in discussion with the Council of Eminent Persons (CEP) and the Transport and Finance Ministries to come up with several options to scale down construction costs.

"The MRL has paid more than RM10 billion (S$3.3 billion) to the main contractor, the China Communications and Constructions Company and there is a claim of RM9 billion for work done.

"So it will be quite a waste because the figure to compensate them is quite high," the source said.

In Kuantan, at the site in KotaSAS, where the project was launched with much fanfare, all that remains is an empty swathe of land.

Besides the ongoing construction to build the new Pahang administrative centre nearby, it was all quiet at the site where former prime minister Najib Razak performed the ground-breaking ceremony.

A security guard at the site said no actual rail construction had been carried out since the launch.

The guard, who declined to be named, said there were no workers from China or an ECRL office located at the site.

He was surprised when told of Dr Mahathir's announcement.

"But then again, there was never any railway construction here. So, there's nothing to stop," he said.

A large signboard near the site stated that the KotaSAS Central station would open in 2021.

Meanwhile, the opposition MCA deputy president Wee Ka Siong said the decision to cancel the ECRL project will be bad for future relations with China, as it involves the Belt and Road Initiative.

The benefit of the ECRL project, he said, should not be simply measured from the revenues to be collected by the government.

"If we only measure from its direct benefit alone, it is also not beneficial to build highways without tolls such as the Pan Borneo Highway or the Central Spine Road highway.

"(From the project), job opportunities and economic benefits are created, various industries will be spurred and the cost of land in the surrounding area of the stations will rise."