JAKARTA (AFP) - Indonesia's disaster agency spokesman is fighting a daily battle to update the world 24/7 on the latest developments in a deadly quake-tsunami, despite his own impending date with death from terminal cancer.

Dr Sutopo Purwo Nugroho, known affectionately as Pak Topo (Mr Topo), is the face of the government's communication efforts to get word out on the devastating crisis on Sulawesi island that has killed over 1,400 people.

The 48-year-old refuses to pass the torch, dragging himself to daily press briefings, taking reporters' calls and communicating on social media at a frantic pace, even as he "feels weaker every day" from Stage IV lung cancer.

"I can't lie about my physical condition - the cancer has spread to other parts of my body and it's weakened my body," he said in a heart-wrenching message to reporters on social media this week.

"I apologise if I cannot respond to every question from journalists, my friends. If I was healthy, I would surely do it no matter what."

Pale and visibly thinner, Dr Sutopo got the grim news in January that he was dying and might have as little as a year to live.

Dr Sutopo has reportedly promised his wife to slow down his work schedule, but he is showing few signs of easing up in a job that has made him a household name in disaster-prone Indonesia. 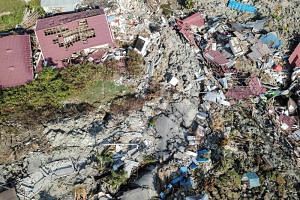 He managed to get out a 200-word update on a deadly landslide back in February from his hospital bed, local media reported.

Then in August, he was sending out reports on a deadly quake disaster on Lombok island, next to Bali, minutes after finishing a chemotherapy session.

Dr Sutopo, who has a doctorate in natural resources and the environment, took the job eight years ago in a bid to combine his education with a love of writing, he told the Jakarta Post earlier this year.

"Doctors told me that with chemotherapy and radiation, I probably have one to three years left," he was quoted as saying.

"Illness or death is in God's hands, but while I'm still alive, I still want to do my best to serve others."