In his commentary, the writer applauds Philippine President Rodrigo Duterte's efforts to build peace in Mindanao.

MANILA (PHILIPPINE DAILY INQUIRER/ASIA NEWS NETWORK) - "If I become president, if Allah gives his blessing, before I die since I am old, I will leave to you all a Mindanao that is governed in peace," President Rodrigo Duterte promised during his fateful presidential campaign in 2016.

Surely, it takes a whole village to raise a child, and generations of leaders to bring about reconciliation and peace.

But if there is a single person who should be credited most for the largely successful plebiscite on the Bangsamoro Organic Law (BOL), it's the Filipino President.

Make no mistake: The ratification of the BOL will not magically solve the conflict in Mindanao overnight. It will likely bring about new security and societal challenges we are still unprepared for.

Yet, for anyone with a beating heart for peace and an unprejudiced familiarity with the facts on the ground, the creation of the proposed Bangsamoro is a correct step in a journey of a thousand miles, which will surely be tortuous and full of unforeseen challenges.

Unlike any of his contemporaries and predecessors in the national government, the former mayor of Davao has invested both his heart and soul in solving the riddle of peace in his home island.

To be fair, former presidents, most especially Fidel Ramos and Benigno Aquino III, painstakingly spent years negotiating the parameters of peaceful coexistence with our Moro brothers and sisters. They should certainly be credited for their commendable efforts, which laid the foundation for just peace in Mindanao.

What makes Mr Duterte's case unique and exceptional, however, is his unparalleled sincerity when it comes to his vow to end "historical injustices" committed against the Muslim minority. 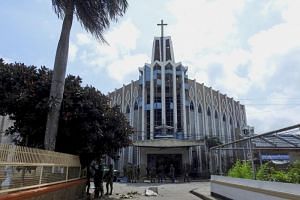 To him, it's not just a question of national security and peace advocacy, but also a spiritual struggle and personal destiny.

Up until that point, never in my life did I expect a major Filipino leader to chant Arabic words, and patiently and bravely explain to the mostly Christian audience that those sacred words to Muslims mean that "God is great," that He is greater than anything imaginable to a secular mind.

What his critics often overlook is Mr Duterte's ecumenical bent and his repeated calls for a dialogue among faiths.

He has consistently gone the extra mile to underscore the shared monotheistic roots of both Christianity and Islam, which have a common prophetic parent in Abraham and believe in a single Creator, who they call by different names with varying theological nuances and rituals of worship.

Unbeknown to much of the world, the controversial Filipino President has become one of our greatest voices for interfaith harmony.

It's precisely this refreshingly cosmopolitan outlook, not to mention heartfelt yearning for peace, that explains why Mr Duterte expended significant political capital to rally legislative support for the Bangsamoro project, which is supported by only a plurality of Filipinos.

To prevent the Bangsamoro from becoming an ARMM writ large, the Duterte administration pushed for sufficient fiscal and institutional support to facilitate the process of transition.

After all, the ARMM's failures were largely a result of a profound governance deficit and institutional vacuum, which can be blamed on both local leaders as well as the national government.

Mr Duterte has shown nothing short of an act of political courage, which has been often missing in today's cynical politics of opportunism and cowardly calibration.

As the latest terror attacks in Jolo poignantly demonstrate, the path ahead is far from smooth.

Yet, what's clear is that the Philippines has finally taken a major step to end one of the world's most brutal, devastating and long-running conflicts.

The writer comments regularly on national and regional affairs. The Philippine Daily Inquirer is a member of The Straits Times media partner Asia News Network, an alliance of 23 news member countries.