Bukit Aman Narcotics Crime Investigation Department deputy director DCP Datuk Kang Chez Chiang said at a press conference in Klang that the police are in the midst of identifying the syndicate, The Sun Daily reported.

"Further tests conducted on the samples showed the coffee mixture packet had been opened and resealed. Also, the resealed packet was heavier by 10g compared with the original weight," he said.

"We believe the drug-laced coffee powder was meant for entertainment outlets in Penang but the syndicate discarded it along the road at Taman Ria, Air Itam in Penang possibly fearing police action," Kang added.

Kang also said police believe members of the public who picked up the coffee packets would not be able to tell if the products have been tampered with.

According to Kang, the police are still waiting for the lab results from samples sent to the Chemistry Department but it has been ascertained that the drug-laced drinks have no link to psychoactive substances.

"The durian coffee incident is confined to Penang so far," he said, adding that police do not know yet how much drugs were mixed in to the drinks.

Our products are suitable for all, say employees

Meanwhile, Health Minister Datuk Seri Dr S. Subramaniam said investigations into the coffee mixture by the Health Ministry's Safety Department is expected to be finalised by end of next week, The Sun Daily said in their report.

He said investigations at the manufacturing processing premises and coffee batches on the shelves, are ongoing.

"As I've said in Penang yesterday, there is a consistency - none of those who had taken this coffee bought it in a shop. It's either given by individuals or taken from garbage cans, so there's something fishy here, which is why we've asked the police to investigate it thoroughly whether there's an element of crime," he added. 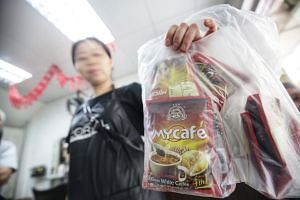 Premix coffee that causes consumers to fall ill may have been tampered with: Malaysian police

In the latest case, two garbage truck drivers were hospitalised in Penang for dizziness and bouts of vomiting after drinking the coffee, given to them by their colleague - a Bangladeshi garbage collector who found the stuff in a dustbin, The Star reported.

His colleague Md Ruslan Hussain, 59, also complained of blurred vision and dizziness before passing out. Their housemates then sent them to Penang Hospital.

George Town OCPD Assistant Commissioner Anuar Omar said Mat Dat received the beverage from the Bangladeshi worker on Thursday. He said the worker, who found two packets of premix coffee in a dustbin, kept one for himself and gave the other to Mat Dat.

"We have contacted the supervisor of the garbage collecting company in Relau to look for the worker. "We want him to hand us the packets for investigation," he said.

In earlier cases, five persons, including two women aged between 19 and 62, became ill between Jan 27 and 30 after consuming durian coffee sachets, which were believed to have been tampered with.

Like the two latest victims, they had consumed the same brand of instant coffee powder.

Initial police probe revealed that the sachets were opened and resealed, with 10g of a green substance added inside.