PUTRAJAYA/JOHOR BARU - A fight between two triads was the cause of the brutal murder of a man at a petrol station in Johor Baru, Malaysia's Deputy Prime Minister Ahmad Zahid Hamidi said on Tuesday (Dec 19), according to media reports.

The victim, whom Malaysian media have identified as Tan Ah Choy, or Ah Chiu, was believed to be the leader of an underworld organisation, Dr Zahid was quoted by The Star as saying. The 44-year-old victim was savagely attacked by four men at a petrol station in Taman Pelangi on Sunday.

"Police have zeroed in on the reason and have identified the four assailants. A manhunt has been launched to nab the suspects," Dr Ahmad Zahid, who is also Home Minister, said after attending the Home Ministry monthly assembly, The Star reported.

Separately, the deputy police chief told reporters he had ordered a task force to be formed to investigate the case.

“This is a very serious incident that has traumatised the public," Deputy Inspector-General of Police Noor Rashid Ibrahim said at a press conference on Tuesday.

“I have contacted the Johor police chief and instructed him to form a task force for the case."

Police were seeking to determine the areas in which the said two gangs operate and whether they were competing for business or territory.

Meanwhile, a police source told The Malay Mail that the victim, who the paper said had 13 previous drug records, may have been caught in a drug dispute.

Citing the source, the paper said the police had singled out a drug dispute as a possible motive for the murder. They have launched a manhunt for the four attackers, who were filmed stabbing the victim and running over him with their BMW car at the Shell station, to the horror of onlookers.

"Initial investigation suggests the victim was involved in drugs, and the suspects are believed to be his suppliers," The Malay Mail cited its police source as saying.

"The dispute between them started when the victim was unable to pay for the supplies he had taken from the syndicate members over several months."

The source told the paper that the victim started to avoid his suppliers, incurring their wrath.

"The fact that the victim was murdered in public by being stabbed and run over by a car twice clearly shows the suspects had a grudge," said the source.

"The suspects made no effort to hide their identities... they probably wanted to send a strong message."

A video of the attack in JB's Taman Pelangi was widely shared on social media, but police say the white BMW 5-series that carried the assailants used a fake registration number.

The number belonged to a 55-year-old man from Ipoh who lodged a police report on Monday morning, saying his car was repossessed a few months ago after he defaulted on the instalment payment, reported The Malay Mail.

Police checks showed the car registration number to be on a repossession list. "Our investigation suggests whoever repossessed the car did not declare it to the bank," the paper quoted the source as saying.

They have identified the four suspects and are stepping up efforts to locate them. They will also interview Tan's girlfriend, who was at the scene of the attack.

Malaysian media identified her as Vietnamese. She collected Tan's body from a mortuary on Monday afternoon after a four-hour post-mortem. The authorities concluded that the cause of death was a stab wound to the heart. 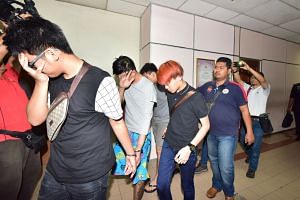 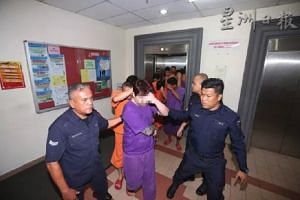 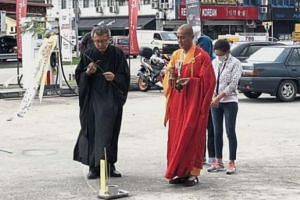 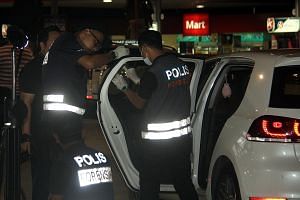 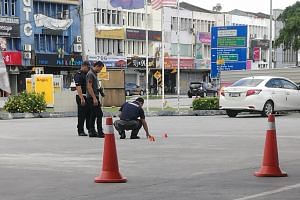 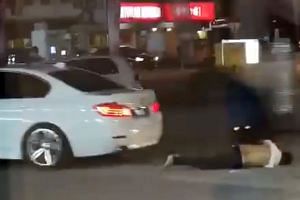 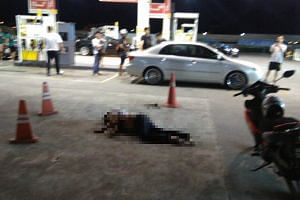 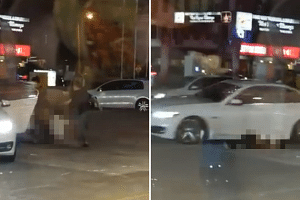