KUALA LUMPUR (THE STAR/ASIA NEWS NETWORK) - Prime Minister Mahathir Mohamad said on Friday (Jan 4) he has not received any official confirmation or indication on rumours that the Malaysian King would be stepping down.

"Like you, I've heard rumours. I have not received any letter or any official indication about anything. So I am not going to talk about all this," he told reporters when asked to respond to speculation on social media that Sultan Muhammad V would soon abdicate.

When asked if the Yang di-Pertuan Agong, as the King is officially called, had returned to work after going on leave for two months up to Dec 31, Tun Dr Mahathir said: "As far as I know."

The premier spoke to reporters after chairing the Pakatan Harapan presidential council meeting.

Asked if the Conference of Rulers could appoint an acting King for the current term, Dr Mahathir replied that this was up to the rulers to decide. The conference groups the nine sultans of the royal Malay houses and four state governors,

Meanwhile, Sultan Muhammad V was seen in a mosque in the Kelantan capital of Kota Baru, performing Friday prayers. He sat in the front row at Masjid Al Sultan Ismail Petra, named after his father the former ruler of Kelantan.

Under Malaysia's unique rotational system among the nine Malay royal houses, the sultans take turns to be appointed as constitutional monarch every five years. 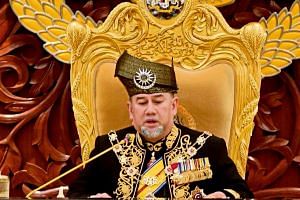 On Thursday, Kelantan Deputy Menteri Besar Mohd Amar Nik Abdullah tried to tamp down speculation about Sultan Muhammad V abdicating by asking the public not to believe in rumours.

Datuk Amar asked the Attorney-General's Chambers to clamp down on what he said was fake news circulating on social media about Sultan Muhammad V.

Meanwhile, the New Straits Times reported on Friday that an unscheduled meeting among the Malay rulers took place on Wednesday night.

The national palace Istana Negara, however, has not confirmed or denied the alleged wedding ceremony.