Tan Sri Abdul Hamid, the Inspector-General of Police, said the police had drawn up a list of witnesses to be called up for their statements to be taken.

"We have a standard operating procedure for taking action in this matter," he said on Monday (Dec 23).

The country's top cop said the police would take necessary action on any matter of public concern.

"We will also wait for specific instructions from the Attorney General's Chambers," he told a press conference on Monday after an event in Kuala Lumpur.

Azilah's claim first surfaced in the media on Dec 16, after he filed the statutory declaration as part of his application to have his conviction and death sentence for Ms Altantuya's killing in 2006 reviewed.

According to news site Malaysiakini, the former chief inspector claimed in his statutory declaration that Najib had ordered him to "arrest and destroy" Ms Altantuya because she was a "foreign spy" and a "threat to national security".

"I asked the DPM what he meant by arrest and destroy the foreign spy, he responded: 'Shoot to kill', and indicating it with a 'slit the throat' gesture," Azilah, 43, stated.

He also claimed that Najib had told him to destroy the body with explosives to remove all traces of it, adding that Najib warned him to be "cautious" of the spy and that she would claim she was pregnant. 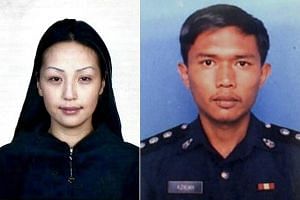 Najib has denied the allegations as a "complete fabrication" and maintains that he has never met Ms Altantuya.

Another former police commando Sirul Azhar Umar was also convicted and sentenced to death for the Mongolian's murder. He is now held in a detention centre in Australia, after having fled there in 2014 while on bail, and has applied for asylum.

Both Azilah and Sirul were members of the police force's special action unit, or unit tindakan khas (UTK), and their duties included acting as body guards for important people like Najib.