KUALA LUMPUR (THE STAR/ASIA NEWS NETWORK) - If you don't approve, just don't look. That's the advice from Malaysia's transport minister to an Islamist lawmaker who complained that air stewardesses' uniforms are too revealing.

Datuk Che Abdullah Mat Nawi, who is from Parti Islam SeMalaysia (PAS), had asked Transport Minister Anthony Loke in parliament on Wednesday (Aug 1) whether he agreed that the uniforms of Malaysian flight attendants were too revealing.

"Do you find them too menjolok mata (revealing and indecent) compared to those in some international airlines like in the US and other places where (stewardesses) wear pants as uniforms," asked Che Abdullah.

Mr Loke replied: "This is subjective. If you think it is revealing then don't look at the stewardesses."

Earlier, Mr Loke had said that airline companies need to adhere to safety standards, including those on emergency evacuations, as drawn up by the International Civil Aviation Organisation (ICAO) and the Civil Aviation Authority of Malaysia (CAAM).

He said in order to receive the safety certificate, airline companies need to ensure that the uniforms worn by the flight crew enable them to carry out safety procedures. 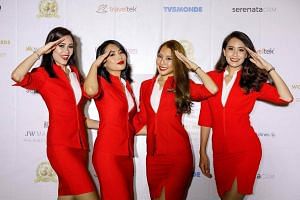 "As such, airline companies are free to pick the attire of their crew, as long as it fulfils the set criteria," said Mr Loke.

But he added that his ministry would also not restrict Muslim air stewardesses from choosing to wear attire that is syariah compliant, "as long as it fulfills the criteria set by CAAM".