In his commentary, the writer calls on Thai Prime Minister Prayut Chan-o-cha to hold elections in his country before he assumes the Asean chairmanship.

JAKARTA (THE JAKARTA POST/ASIA NEWS NETWORK) - Next year, Thailand will get its turn chairing the 10-member Asean, replacing Singapore.

It will be a major political boost for the general.

Will Indonesia just let it happen?

This time, the change is much more than a regular transfer of chairmanship.

The Thai junta does not deserve the position amid strong waves of democratisation in this region.

We just witnessed how Malaysians responded to a corrupt leader.

Myanmar is also undergoing a major transformation of democracy, although de facto leader Aung San Suu Kyi has not been able to fully control the country.

The Philippines and Indonesia belong to a club of democratic nations despite domestic problems.

Asean is quite rigid in practicing non-interference and mutual consensus.

The 2007-written Asean Charter lays out the basic rules.

Myanmar was given the chair of the Asean Summit in 2014 - three years after the country was led by Thein Sein - as a reward for transforming the country into a democracy after decades of dictatorship.

According to then-Indonesian foreign minister Marty Natalegawa, Myanmar's reforms made it possible for the country to assume the chairmanship role.

Asean will unnecessarily humiliate itself in front of the global community when the regional grouping introduces Prayut as the chair next year.

The general toppled democratically elected prime minister Yingluck Shinawatra in May 2014 with a campaign centered on stopping alleged rampant corruption and abuses of power by the younger sister of the ousted leader, Thaksin Shinawatra.

It is true that the retired general has taken strong measures against alleged corruptors, but he prioritised taking down opposition leaders.

For Indonesians who experienced life under Suharto, Prayut's tactics to silence the media, manipulate legislative bodies and oppress freedom of speech and assembly are familiar.

But why do Thais, including the media, seem to "accept" the junta?

After failing to fulfill his promise of holding free and fair elections, Prayut renewed recently his commitment to do his best to ensure that the country eventually holds elections.

It is highly unlikely that he honours his word. 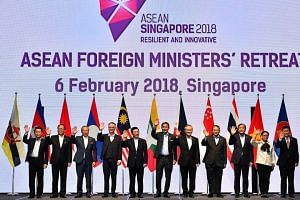 Thailand's neighbours should help it to regain its reputation as not just a role model for economic development and good governnance, but also as a nation that ensures civilian supremacy.

Thailand is a founding member of Asean along with Indonesia, Malaysia, the Philippines and Singapore.

The country's role in Asean, which was established in Bangkok on Aug. 8, 1967, has always been crucial.

Thailand has gone through 25 general elections, 19 coups d'état and 20 constitutions since 1932.

Many believe that this regime is one of the most repressive juntas, having oppressed the nation for four years.

Thailand has a very respectable position and plays an instrumental role in Asean.

It is the only nation in the region that has never experienced the bitterness of colonialism.

Preventing the Thai junta chief from chairing Asean is not meant to punish the people, but the military generals.

Prayut has cleverly manipulated prolonged conflicts between the supporters of Thaksin Shinawatra (Red Shirts) and the supporters of the elites, the military and, to a certain extent, the monarchy (Yellow Shirts).

Thaksin was the prime minister from 2001 to 2006 before he was ousted by the military. But he remains very powerful and, under various party names, has won six elections.

His younger sister Yingluck Shinawatra served as prime minister from 2011 to 2014.

Prayut toppled her government and brought her to court, but later allowed her to flee Thailand before the court issued its verdict.

For more than 17 years, Thaksin has been regarded as an enemy of the nation by the military and its supporters.

But the fact that he won several elections shows that the people want him as their leader.

The country should turn to democracy, not military takeovers.

They will also meet their dialogue partners from major powers.

This is a good opportunity for Foreign Minister Retno Lestari Priansari Marsudi to raise the junta problem with her Asean colleagues.

President Joko "Jokowi" Widodo needs to use a strategy of silent diplomacy in discussing with other leaders Thailand's role.

He must, of course, act according to the consensual Asean way.

Thailand deserves the right to chair Asean, but not under a junta that has continued to cling on to powers it robbed from the people four years ago.

Before he chairs Asean next year, Prayut should fulfill his commitment of holding a free and democratic election.

If he does not do so, he should not chair the trade bloc next year.

The writer comments on Indonesian and regional affairs. The Jakarta Post is a member of The Straits Times media partner Asia News Network, an alliance of 23 news media entities.