PETALING JAYA (THE STAR/ASIA NEWS NETWORK) - A diesel pollutant detected in Sungai Selangor in the Malaysian state of Selangor forced the shutdown of four water treatment plants on Sunday (July 21), affecting consumers in the Klang Valley, one of the country's most densely populated areas.

Dr Xavier Jayakumar says the police have found elements of sabotage in the contamination of Sungai Selangor, which has caused major water disruptions in the Klang Valley.

“I was informed that the police have identified elements of sabotage,” said the Water, Land and Natural Resources Minister in a tweet Monday (July 22).

The National Water Services Commission (SPAN) had lodged a police report on Monday over the two incidents of pollution in Sungai Selangor that caused major water treatment plants to be shut down over the last few days.

The report was lodged at the Bestari Jaya police station in Kuala Selangor.

SPAN chairman Charles Santiago said they hoped the police would investigate if there were elements of sabotage in both incidents.

He added that it was a crime under Section 121 of the Water Services Industry Act 2006 to cause water to be contaminated.

The Rantau Panjang plant was shut down at 6pm on Sunday, while the Sungai Selangor Phases 1, 2 and 3 water treatment plants were shut down between 8pm and 8.15pm, said Syabas, which is a member of the Air Selangor group.

By 3.30am on Monday (July 22), however, all four plants were back in operation, the water supplier said.

Air Selangor customer relationship and communication department head Abdul Raof Ahmad in a statement on Sunday night said Syabas had reported the contamination to the authorities and found that the source of pollution came from sand dredging works upstream.

The earlier shutdown was attributed to odour pollution traced to Sungai Liam in the town of Batang Kali in Selangor.

State Environment, Green Technology and Consumer Affairs Committee chairman Hee Loy Sian said earlier that illegal factories and workshops in Batang Kali would be ordered to close if they were found to be the source of the river pollution. 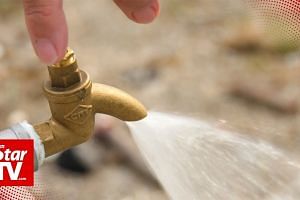 He has directed the Hulu Selangor District Council, which administers Batang Kali, to inspect all premises in the area to find those involved in discharging effluent into waterways.

"We also suspect the culprit could have flushed the effluent down the toilet, as a sewage treatment plant in Batang Kali was covered in black oil.

"We take this issue very seriously because it caused massive water supply disruption and put the public at risk," he said.

Mr Hee called on the council to look at alternative sites to relocate the factories and workshops in the area.

He also urged local councils and the Selangor Water Management Authority (Luas) to press for a maximum penalty under the existing laws to serve as a deterrent.

National Water Services Commission chairman Charles Santiago said the law should be amended to impose harsher penalties on the culprits.

"The law needs to be rewritten to safeguard water catchment areas. The existing penalties for environment-related offences are a mere slap on the wrist," he said.

"Company owners, board of directors and top management should be charged in court if their factories or businesses are involved in illegally discharging effluent," Mr Santiago said.

"Some companies get away by blaming it on their workers. Only when the top management are held accountable would they take managing hazardous waste more seriously."

Selangor's sand mining concessionaire Kumpulan Semesta Sdn Bhd (KSSB) had said in a statement that it had detected diesel spillage in the river close to the Hang Tuah pond at about 6.15pm on Sunday (July 21).

It said in a statement that it was investigating the possibility of sabotage, adding that the situation was regretted.