Deputy Health Minister Lee Boon Chye expects the number to hit 150, 000 cases by year end if efforts are not taken to keep it under control.

The figures between January and Aug 3 is almost double that of last year's figures for the same period - 42, 496 cases with 70 deaths.

There were 251 hotspots in nine states and most of the hotspots were flats and apartments.

Dr Lee said the ministry was using various ways to overcome the dengue outbreak in the country, such as fogging and removing mosquito breeding sites.

A new method, the release of Aedes mosquitoes infected with the Wolbachia bacteria to bring down the population of the mosquitoes, was still being monitored, he said.

He said while dengue vaccine was used in the Philippines but it was withdrawn after it led to higher mortality rate. 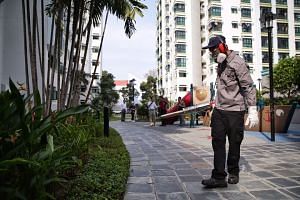 The ministry is monitoring the dengue situation continuously and receives weekly reports on the number of cases.

With district health offices nationwide keeping an eye on the situation, once dengues cases are reported, measures such as fogging are immediately implemented, he said.

When there is a hotspot, the health office also organises a gotong royong (a combined community effort) with local residents via COMBI (social mobilisation and communications) or local council, he added.

Dr Lee reminded the public to play their role in ensuring their areas are free of Aedes mosquitoes.

"Dengue is increasing in many parts of the world even in Singapore. Cuba eradicated it once but it has re-emerged. Southern China, southern Taiwan and southern Japan also have reported cases.

"As air travel becomes common, the virus spreads, " he said.

The health ministry's director-general Datuk Dr Noor Hisham Abdullah said that since June, the trend of weekly dengue cases has increased and reached 3, 557 cases a week but there was a slight decrease in the first week of August.

About 70 to 80 per cent of the dengue cases occurred in urban areas, he said.

The World Health Organisation report on Dengue Situation (Update Number 572 dated July 4) showed that Malaysia was not the only country which experienced an increase in dengue cases as neighbouring countries such as Singapore, the Philippines, Taiwan, Vietnam, Cambodia, Laos and China had it too, he said.

The change in serotype -- the species of bacteria -- called "serotype shift" also triggered the dengue surge.

"It has been observed that dengue cases will increase usually four to six months after a serotype shift due to the lack of immunity in the community towards the new serotype," he said.

"From our surveillance monitoring, there was a shift of dengue serology from dengue virus strain (DEN) 3 to DEN 2 in June last year. Theoretically, DEN 2 is associated with more severe manifestation and high fatality rate, " Dr Noor Hisham added.

In the same period from January to Aug 3, fewer than 1 per cent of the cases were severe dengue (dengue haemorrhagic fever) .

"There is no specific treatment for dengue or severe dengue, but early detection and prompt medical care will save lives, " Dr Noor Hisham said.

He added that the changing rainy and hot seasons resulting in stagnant water collected, people movement and increase in population density in urban areas also facilitated the spread.

Studies have shown an association between the occurrence of dengue cases and outbreak with the temperature, rainfall and humidity, he said.