In the article, the writer says that Indonesia should not fear China's Belt and Road Initiative, as long as it has its democratic checks and balances mechanism in place.

JAKARTA (THE JAKARTA POST/ASIA NEWS NETWORK) - Beware the debt trap. Chinese workers are invading us. We are losing our sovereignty.

These are some of the warnings that have emerged in the past month after Indonesia announced that it would go after the billions of dollars offered under China's Belt and Road Initiatives (BRI) to finance the government's ambitious massive infrastructure program.

Vice President Jusuf Kalla touted 28 projects with a total price tag of US$91 billion (S$124 billion) to be financed under the BRI when he attended the Belt and Road Forum in Beijing in April.

The first reactions back home were one of caution and some even advised against the idea lest Indonesia follow countries like Sri Lanka, Pakistan and Malaysia, who are experiencing problems with the Chinese projects.

But those expressing reservations ignore two important factors that have spared Indonesia from the fallout of having too much Chinese investment.

First, compared to those other countries, Indonesia is much larger and has more leverage in dealing with China.

It is the fourth-most populous nation, the seventh-largest economy (based on purchasing power parity), supplies raw materials and agricultural products vital to China and controls sea lanes through which international shipping passes to take goods to and from China.

Admittedly, our negotiating skills are still left wanting, as we tend to give away far more than we take. This has been Indonesia's problem for centuries, the reason why we let ourselves be dominated by European empires.

But the point is, we have more chips to bargain with, and Beijing knows it.

Second, Indonesia is a democracy where free speech is guaranteed, with an elected government that is constantly under public scrutiny and held accountable for all its actions. 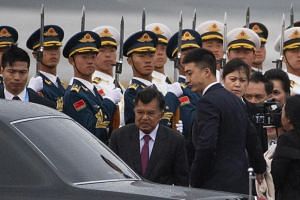 Indonesia wants BRI projects to be in line with national development plan, no government debt

This also applies to the policy of bringing in foreign investors, including those from China.

The Jakarta-Bandung high-speed railway, which ushered in the Belt and Road in 2016, illustrates just how democracy helped prevent the government from making the wrong decisions.

The deal took months to complete, but as Indonesians and Chinese officials negotiated the terms, the public joined in, with debates based on details that were leaked.

A Cabinet minister lost his job for holding back the agreement, but he had a very good reason for doing so.

It would be his neck if the project later turned out to be a financial disaster for the country.

The $5.9 billion (S$ 8 billion) contract was eventually signed, and the project is now underway.

It may not be the perfect contract, but we could at least say that it went through thorough public scrutiny.

Democracy, with its transparent and accountable government, is the first line of defence against bad decisions.

If Indonesia had been governed by a dictator, he would ignore public criticism and sign up as many BRI projects as he could lay his hands on, and not primarily because the country needs it, but more because of the hefty commissions that would go into his pockets and the lucrative contracts that his children and cronies would secure.

The problem with Belt and Road has more to do with borrowers than with the lender.

Too much openness has its downsides, especially now in the era of internet and fake news. One of them is the politicisation of the growing presence of Chinese money and influence.

There was a valid case concerning the presence of more Chinese workers above than the number agreed upon under the terms of investment, but it was more a case of a few hundred and not millions as some suggested.

Critics of the government seized on the opportunity and lumped Chinese tourists coming to Indonesia, whose number has been growing, with the rise of Chinese workers' presence.

And there are conspiracy theories about China's hegemonic intentions, reviving the episode in the 1960s when Indonesia froze diplomatic relations with China for over two decades after accusing the communist state of meddling in its domestic political affairs.

The anti-China sentiment from that bygone era lingers, and now with the growing presence of Chinese workers, irrespective of whether they are legal or not, these issues would be invoked as threats to the nation.

But this is an election year, and in a democracy, almost anything goes.

Another problem with democracy is that it slows down the decision-making process.

Relative to its size and needs, Indonesia counts among the slowest Asia in taking up BRI money.

There is a powerful case to make that decisions in the country could be made faster, but it should not come at the expense of free speech, transparency and accountable government.

S-E Asia's cautious embrace of the Belt and Road Initiative

We are fine with public scrutiny playing a role in making big decisions.

Suharto made his decisions swiftly and efficiently because no one dared to challenge him.

But the absence of democratic checks and balances led to massive corruption that brought about the nation's bankruptcy and the collapse of his regime in 1998.

China is not a democracy, but increasingly negative global opinion about Belt and Road forced President Xi Jin Ping to instil more transparency and accountability elements into the contracts.

Indonesia has been on the right track in its approach to Belt and Road, and it will remain so as long as we have the democratic checks and balances mechanism in place.

We should heed the warnings of lessons learned from other countries, but we should also stop underestimating our own capacity.

The writer is a former editor of the paper and a regular commentator on Indonesian affairs. The Jakarta Post is a member of The Straits Times media partner Asia News Network, an alliance of 24 news media entities.