BUKIT FRASER (THE STAR/ASIA NEWS NETWORK) - The big boom in demand for durians from China is proving to be a thorny issue in the so-called durian capital of Malaysia.

Raub, located less than two hours from Kuala Lumpur, has seen a steady stream of visitors, especially tourists from Singapore and China.

But for some months now, residents in Fraser's Hill, some 8km from Raub, have spotted clearing and open burning activities on a hilltop in the Hulu Sempam area.

The 404-ha plot, which borders the Batu Talam Forest Reserve that is also a water catchment area, is being cleared for a Musang King plantation.

Even more worrying is that a logging licence has also been awarded for another piece of land adjacent to the plot.

Identified as Environmentally Sensitive Area (ESA) Rank 1 in the Pahang Structural Plan 2050 draft, the surrounding areas have been marked as a confirmed habitat for the critically endangered Malayan tiger, of which there is less than 300 estimated in the wild.

It is believed that the cleared plot is only part of some 1,213ha of land which will eventually be razed for Musang King plantation. 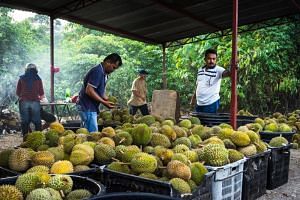 The elevation of the cleared area in Hulu Sempam ranges between 400m-900m above sea level.

A check with the Pahang Forestry Department confirmed that the land was being cleared for Musang King by a state government entity.

Shown a drone picture of the land clearing, its director Datuk Dr Mohd Hizamri Mohd Yasin confirmed that the area cleared was for Musang King.

"The project on that site does not need permission from the Forestry Department."

"The project is owned by the Perbadanan Setiausaha Kerajaan (a state-linked company)," he said.

Indicating another area nearby, Dr Mohd Hizamri said a logging license had been issued for the state government land measuring some 161.88ha.

He insisted that both plots of land involved were outside the forest reserve and the water catchment area.

According to environmental group, Peka, the degazettement of the land was legal, which had seen 404ha planted with Musang King durian trees under the first phase.

"Phase two, which will see 809ha being cleared for Musang King, is currently in progress," it said.

It said the Sg Sempam water plant was for the Raub district.Wildlife conservation group WWF-Malaysia says the Hulu Sempam area is vital to the survival of the Malayan tiger, which is now considered critically endangered.

The area, said WWF's Siti Zuraidah Abidin, had also been identified as an Expected Tiger Habitat under the National Tiger Action Plan for Malaysia 2008-2020 and its surrounding forests a confirmed tiger habitat.

"Land clearing at Hulu Sempam can cause the wider forests to be fragmented, which in turn can affect the wildlife movement," she said.

In June 2015, the Malayan tiger was moved from the "Endangered" to "Critically Endangered" category in the International Union for Conservation of Nature Red List of Threatened Species.

However, with just two years to go before the plan's end date, the number of tigers in the wild is believed to have dwindled to about 300.

She said under the Pahang Structural Plan 2050 draft, the area had been identified for agricultural purposes.

"However, in the same plan, the area is also identified as Environmentally Sensitive Area Rank 1.

"For ESA areas Rank 1, development, agriculture or logging is not allowed, except for ecotourism, research and education.

"In our opinion, we consider this area as Environmentally Sensitive Area Rank 1 due to its important function as a water catchment forest, even though it may not be legally recognised as one," she said.

Meanwhile in Raub, durian tourism has led to a boom in business and socioeconomic activities, particularly construction and homestays, but also an increase in traffic jams, especially on weekends during the durian season and a strain on water supply.

From the gleaming water tanks in their front yard, it is obvious that residents in Taman Raub Jaya 6 - as in many housing areas in the district - are used to facing water cuts.

Pensioner Mohd Azmi Yahya, who moved from Kelantan to Raub in 1998, said the frequent water cuts for the past one year or so was a hassle.

"We were told that there's a problem with the local water treatment plant - too much sedimentation. It's very troublesome because we have three to four people living at home at one time. I can't even use my washing machine," he said.

Mohd Azmi said there had been rapid development in Raub recently, with new housing estates and commercial centres, especially in Bukit Koman.

"Maybe this could have put a strain on our water supply."

Farm manager Yong Wah Yen, 58, said there had been persistent water cuts in the housing area since over a year ago.

"I have lived here for about 20 years. Before that, we didn't have much problems with the water supply. But since last year, the supply has been off and on. We would have a day when there's water, then another two days without supply," said Yong, who has three people living in his single storey house.

"I have to make sure that I store enough water every day," he said.

"I have been living with my two sisters here for over 10 years. Luckily, we don't use much water as we do most of our cooking elsewhere.