MANILA - The Philippines on Wednesday (Sept 1) tallied more than two million Covid-19 cases, a new grim milestone as the Delta variant continues to fuel a record number of infections each day despite tough quarantine restrictions.

Hospitals are overwhelmed - more than 70 per cent of their beds are occupied and half of all available ventilators are in use.

Medical staff also suffer from exhaustion, and 103 have died of Covid-19 so far after having been exposed to sick patients for long hours without adequate protections.

Scores of healthcare workers protested in Manila on Wednesday to demand risk allowances and hazard pay, and the resignation of Health Minister Francisco Duque.

President Rodrigo Duterte had given health and budget ministries 10 days from Aug 21 to pay the health workers, after some threatened to resign and unions warned of strikes.

The Philippines is the second most badly hit country in South-east Asia after Indonesia which has more than four million cases.

On Tuesday, the World Health Organisation (WHO) said the extremely infectious Delta variant, first found in India, is now the dominant strain in the Philippines.

First reported in the Philippines only in July, the Delta variant already accounts for 14 per cent of all samples being sequenced.

The Alpha and Beta variants still make up more of the total, but 70 per cent of all samples tested last week were of the Delta strain.

The government on Sunday reported 22,366 new cases - the largest daily increase since the pandemic began.

With just a little over 12 per cent of its population fully vaccinated, the Philippines has fallen back on sweeping shelter-at-home restrictions to contain the spread of the Delta variant.

Current curbs and border controls are in effect till Sept 7.

Hospitals in revolt against Covid-19 and unpaid claims: Inquirer

Data experts from the independent Octa Research group said infections could still hit 25,000 a day, but not surpass 30,000.

Professor Guido David, a senior fellow at Octa, said the restrictions should have an impact by the second week of September. By then, cases should start tapering off.

He said Manila and Quezon City, the two largest among 16 cities that make up Metro Manila, the capital region, have been seeing infections go down.

"This is a good (sign)... If we stay the course, we may see a downward trend by the second or maybe third week of September," he said.

A task force overseeing the country's efforts to roll back the pandemic is considering easing restrictions. Instead of sweeping curbs that span dozens of cities and regions, it is looking at targeted lockdowns.

Metro Manila, home to some 13 million, on Aug 6 went back on a hard, sweeping lockdown for two weeks.

Restrictions have been eased, but only slightly. Nearly all of those living in the sprawling region are still under orders to stay home. 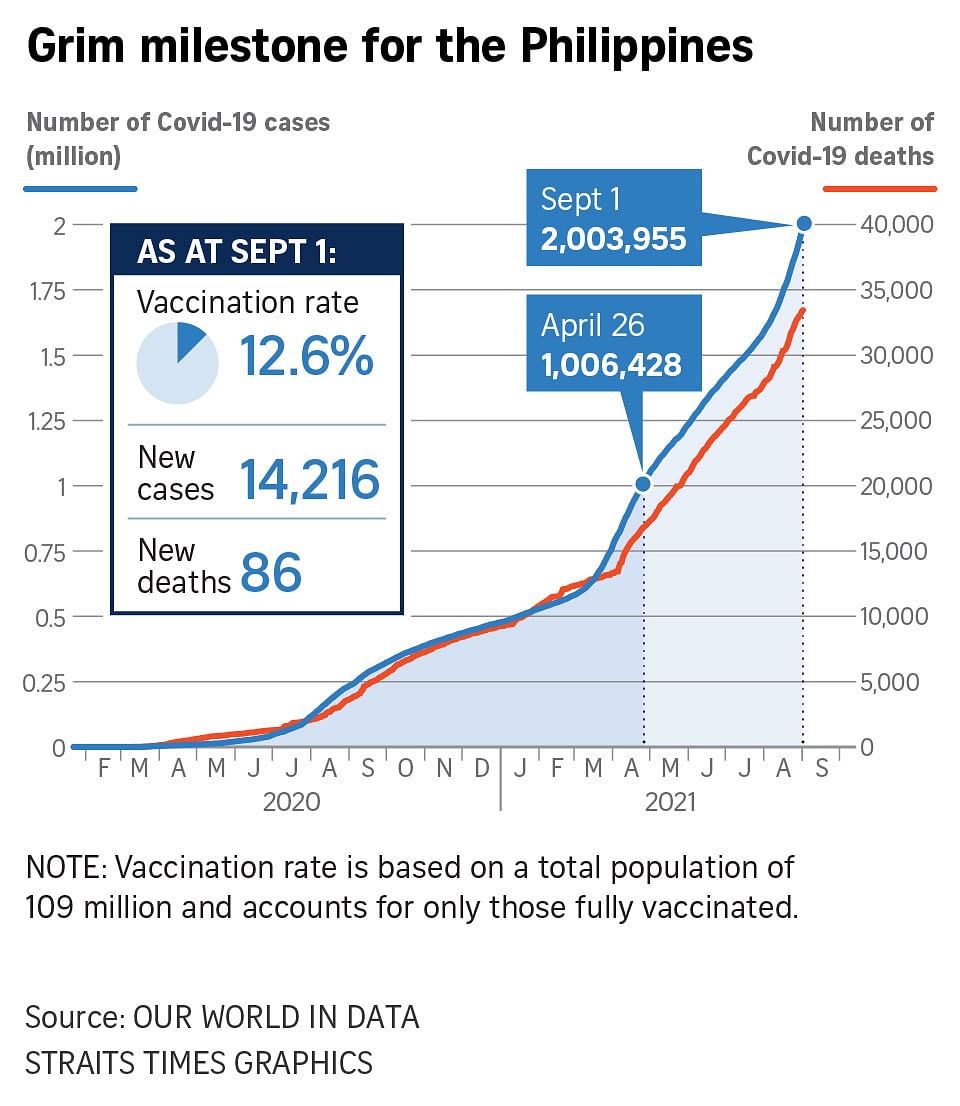