MANILA (REUTERS, AFP) - Philippines President Benigno Aquino on Sunday (June 12) appealed to Filipinos to defend their freedom and democracy and remain vigilant as he warned the horrors of martial law under the late Ferdinand Marcos could happen again.

In his last Independence Day speech before handing over power to president-elect Rodrigo Duterte on June 30, Aquino said Filipinos must prevent a repeat of the late dictator Ferdinand Marcos' 20-year rule.

"Let us remember that just a generation ago, the Philippine government itself was the one suppressing the freedom of our fellow Filipinos," Aquino told foreign diplomats at a formal reception to mark the 118th anniversary of the Philippines' declaration of independence from Spanish colonial rule.

"A fellow Filipino deprived us of our freedoms. It means that if we are not vigilant, this can happen again," Aquino added. 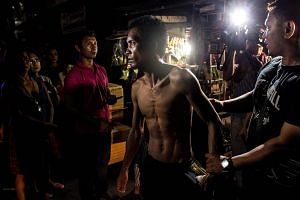 Philippines gets taste of Duterte's anti-crime war as children, drunks are jailed 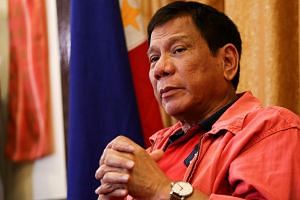 How do you deal with a president like Rodrigo Duterte?

He hailed the transformation of the Philippines during his term from being the “Sick Man of Asia” to one of the fastest growing economies. He said such progress came without disregard for the rule of law, due process and human rights.

Duterte won last month's elections in a landslide largely on a pledge to suppress what he said was rampant crime, and has since vowed to award large bounties to police as well as civilians who kill drug dealers.

Aquino had warned last month during the election campaign that Duterte, the then frontrunner in the race to replace him as leader, carried similar dangers to Nazi leader Adolf Hitler.

Duterte has promised to end crime within six months of his presidency by ordering security forces to kill tens of thousands of suspected criminals, then pardon himself if he is found guilty of mass murder.

Duterte, who takes office on June 30, has been accused of running vigilante squads that have killed more than 1,000 suspected criminals in the southern city of Davao where he has been the long-time mayor. At times he has boasted about his involvement - but on other occasions denied any links to the vigilantes.

Duterte has warned that as president he will shut down Congress and establish a revolutionary government if lawmakers do not endorse his policies.

Duterte has also said he would allow the burial of Marcos at the Philippines’ heroes’ cemetery, despite strong opposition led by the Aquino family. Marcos’ son and namesake said on Saturday his father’s body, which remains in a glass coffin in a mausoleum in his hometown Ilocos Norte, would be transferred to the heroes’ cemetery possibly in September.

Marcos Jnr, who ran and lost the vice presidency in the May 9 election, said he and Duterte discussed the burial plans and the possibility of a Cabinet position for him in the new administration in a meeting in Davao City over the weekend.

The popular Aquino was barred from seeking a second term by the post-Marcos constitution that limited presidencies to a single six-year term.

"Now that we're entering a new chapter in our history, let us not forget that freedom must be guarded and nurtured. We must strive to achieve and fight for all things that matter," Aquino said on Sunday.

"All it takes for evil to triumph is for good men to do nothing," he said, using a quote usually attributed to British statesman Edmund Burke.