KUALA LUMPUR (THE STAR/ASIA NEWS NETWORK) - The deadline for Malaysia to decide on the RM4 billion (S$1.3 billion) Rapid Transit System (RTS) project to link Johor Baru and Singapore has been extended by one more month.

It is learnt that the Malaysian government made the request for the extension during a recent meeting.

The initial six-month grace period granted by Singapore was to expire on Sept 30.

It is learnt that Singapore's decision to grant the extension was conveyed to Malaysia on Friday (Sept 27).

Sources said the extension granted for this time has no financial implications for Malaysia.

"If there is any further extension sought, Singapore will reserve the right to make backdated claims for damages after work on the project was suspended," said a source.

Johor Baru MP Akmal Nasir on Saturday attributed the extension to the federal government's desire to vet the project for any possible financial risks it might incur in the future.

He said the one-month extension would give the government time to study whether the RTS will have a negative impact on the country's debt.

"To me, the RTS is something that both Malaysia and Singapore really need because it will ease the flow of traffic along the Causeway. But at the same time, the government still needs to look thoroughly at the long-term impact to ensure the sustainability of this project," he said.

Mr Akmal added that the federal government really wanted to continue with the project as part of its social responsibility to the people.

"But at the same time, we are also worried about the high costs of operating the service, especially if it is not managed properly," he said.

In March, Malaysia requested a six-month extension to respond to Singapore on issues relating to the project.

Then in May, Singapore and Malaysia agreed to suspend work on the RTS link until Sept 30. 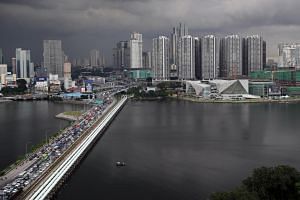 Both governments signed a bilateral agreement last year to build the 4km cross-border MRT link from Woodlands in Singapore to Bukit Chagar in Johor to help alleviate congestion on the Causeway.

Malaysia wanted to find new ways to reduce the cost of the RTS, including getting the private sector to fund and operate it.

Singapore's Transport Ministry had said that it was possible for Malaysia to defer deadlines and review parameters on the RTS project.

However the ministry said this had to be done within agreed terms and with the mutual consent of both countries.

Mr Khaw had said that the RTS link project was "behind schedule" as Malaysia had missed several deadlines.

The completion date for the rail link will likely be delayed beyond the original target of Dec 31, 2024.