MANILA (REUTERS) - Security experts and patrons at a Philippines casino on Friday (June 2) expressed alarm at the apparent ease with which a lone gunman was able gain entry to the building before opening fire and starting a blaze that killed more than 30 people.

The attack at the Resorts World Manila entertainment complex lasted more than six hours before the unidentified gunman was found dead in a hotel room from an apparent suicide.

Officials said at least another 36 people died, mostly suffocated in the chaos as guests and staff tried to flee choking smoke in the complex's main gambling area.

Islamic State in Iraq and Syria (ISIS) claimed responsibility for the attack, but that was rejected by authorities who said it appeared to have been a botched robbery.

The Philippines has been on heightened alert amid a crisis in the city of Marawi, in the south of the country, where troops have been battling Muslim rebels since May 23 and martial law is in place.

"Given the volatile security situation in Marawi the killing of 36 people in the casino is worrying," said Abdul Basit, Associate Research Fellow at the S. Rajaratnam School of International Studies in Singapore. "It reflects poor operational preparedness and intelligence on the part of the Philippines' security forces."

In both Manila and Marawi, on the southern island of Mindanao, government forces with decades of experience fighting guerrillas in the countryside appeared ill-prepared to respond to incidents in built up areas.

Like most Manila casinos and hotels, Resorts World had metal detectors at its entrances and typically checked vehicles before allowing them access.

Oscar Albayalde, chief of the capital's police office, said the gunman left his car in the complex carpark and entered the casino carrying an automatic weapon and gasoline that he used to set fire to gaming tables.

He was first challenged by an unarmed female security guard.

"A security (guard), probably internal security, who is a woman, saw him. When she approached the guy, she saw the firearm," he told reporters. "She was rattled and ran away. She was seen by the public there. That caused panic and a stampede." 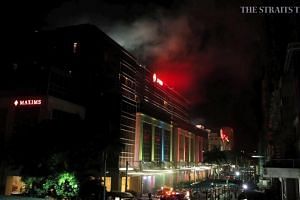 Resorts World Chief Operating officer Stephen Reilly said the gunman was dressed in combat gear and fired a number of shots as he entered the building. "The security guard who was at the door for X-ray screening tried to slow the assailant down but unfortunately could not do so," he said.

While some of the resort's perimeter security team carry guns, the security guards stationed inside the building were not armed.

"We believe that our security (measures) were enough, they will be reviewed," Reilly said when asked whether arrangements were adequate.

Paul Hinlo, a security and risk consultant, said more should have been done to prevent the gunman entering the building and to manage the crowd.

"We did not see anyone guiding or helping the patrons of the casino outside. Everyone fled for themselves," he told Philippines television.

Bureau of Fire Protection spokesman Ian Manalo told Reuters the gunman placed 9mm ammunition on a gaming table which he then set on fire, causing bullets to shoot off randomly and sending those inside ducking for cover.

"That's why they died of suffocation because they hid instead of exiting. Instead of rushing to the fire exit, they hid from the exploding bullets," he said. "The sprinkler system functioned so the fire did not spread. The problem was the smoke."

Jeff Santos, a gambler at the casino who witnessed the attack told a Manila radio station some security guards panicked. "The security personnel at the VIP entrance has a heavy firearm but at the (gaming) floor, no firearm," he said. "Somehow, I understand why the security acted that way because they were helpless."

One casino regular, a man in his 50s who declined to give his name, said security handled the situation well and told people to run.

However, many guests - afraid they would be shot - holed up in the VIP saloon where they were trapped, he said.

Authorities said those who died had quickly become disorientated and unable to find exits.

Manila's main international airport closed the gates of its four main terminals for two hours while the attack at the nearby Resorts World was happening and had implemented extra security measures, airport authorities said.