BANDAR SERI BEGAWAN, BRUNEI -  As Sultan of Brunei Hassanal Bolkiah on Thursday (Oct 5) morning rode in a royal chariot through the capital, crowds that had been waiting for hours under the scorching sun cheered and waved to their ruler.

Standing under giant umbrellas with paper fans, and with cameras and selfie sticks in their hands, the crowd of more than 60,000 lined the main street in the heart of  the city to catch a glimpse of their Sultan and pay homage to his contributions to the country's development, stability and peace.

Among those lining the streets were teacher Mohamad Zaidil Hayat Abdullah, 33, his wife and two children.

“I can’t wait to see the Sultan. He has been our ruler for 50 years and I’m thrilled to be here and be a part of history. He is a fair and wise ruler and very supportive of his people,” he told The Straits Times.

Many had come as early as 3am to secure a good spot along the 3km procession route, braving pattering rain that gave way to sunshine.

Shouts of  "Daulat Tuanku", or Long Live His Majesty in Malay, erupted from the choked thoroughfares as the Sultan, accompanied by his wife, Raja Isteri Pengiran Anak Hajah Saleha, and six children, waved from the carriage drawn by 50 royal guards.

Dentist Emily Lim, 25, who was there to see the procession with her family, told The Straits Times that the highlight for her was to see 26-year-old Prince Mateen, who is sixth in line to the Brunei throne. He had represented his country in the equestrian polo events at the recent 29th Kuala Lumpur SEA Games. Leading the procession were marching bands from the Royal Brunei Armed Forces and the Royal Brunei Police Forces. A special customised vehicle carrying a huge two-pronged spear called the changkah followed closely behind.

Other bearers carried intricate weaponry including swords, daggers and spears. 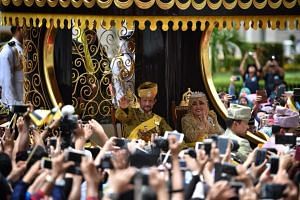 The Sultan himself had a Malay curved dagger slipped in the belt of his royal yellow outfit. The keris named “Si Naga” or “The Dragon” had been handed down from generations of Sultans in the 654-year-old monarchy.

Earlier in the morning, the 71-year-old inspected a parade of more than 300 royal guards of honour, received a 21-gun salute and delivered his golden jubilee speech in the throne hall of Nurul Iman palace.

The Sultan also said there must be "reciprocal responsibility" between him and his people.

"The King's duty is to be fair to the people, and it is the duty of the people to be loyal to the King. The King is responsible to know the ups and downs of his people while the people must be sympathetic to the King," he added. "This is the principle of the life here which has been in existence for 600 years."

On Friday (Oct 6), the Sultan will host a royal banquet for his guests, including Singapore Prime Minister Lee Hsien Loong, other regional heads of government, rulers of several Malaysian states and royal dignitaries like Yang di-Pertuan Agong Sultan Muhammad V of Malaysia, as well as Prince Edward of Britain, and Prince Hashim bin Al Hussein of Jordan.

Live stream of the event can be viewed here.