JAKARTA (REUTERS) - Indonesia's new anti-narcotics chief Heru Winarko has called for an expansion of rehabilitation centres across the country, flagging a new approach in contrast to the war on drugs under way in its neighbour, the Philippines.

More users, addicts and even minor dealers would be diverted into centres run by medical professionals and counsellors rather than head straight into an overcrowded prison system, Winarko told Reuters on Wednesday (April 18).

"With the rehabilitation approach, we cut the demand," he said. "If there is no demand, the supply will not come or reduce."

Winarko said he planned to set up rehabilitation facilities, rather than wildlife, near prisons.

"It is better if there is a rehabilitation centre located close to a prison," he said, noting that a former mental hospital near a correctional facility in Bali was being converted into a centre for offenders to tackle addiction.

"When we do it like this, it will be amazing. The prison becomes a place for guiding people." 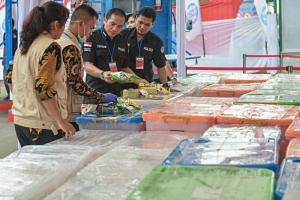 Indonesian President Joko Widodo has long warned that the country was gripped by a "drugs emergency" amid assertions by officials - challenged by some experts - that there were more than six million users.

Joko has said drugs posed a bigger danger than Islamist militancy and he intensified a drugs war that has included the execution of drug traffickers, including some foreigners.

Winarko said there needed to be rapid growth in assessment centres which determine if drug convicts would benefit from therapy rather than incarceration.

The country's 127 rehabilitation centres were inadequate for a population of 250 million, and more should be built and existing facilities better integrated, he said.

David McRea, a researcher from the University of Melbourne, said Winarko's enthusiasm for rehabilitation needed to be treated cautiously.

Indonesia's criminal justice system already allows for some offenders to be rehabilitated but the option is rarely used.

"For years, there's been talk in Indonesia of a shift to rehabilitate people but people are still being sentenced to prison for petty drug crimes," McRea said.

Methamphetamine, known as shabu, is the most popular drug, according to Winarko. More than two tonnes of methamphetamine were seized off the coast of Sumatra island in February in two separate, record busts.

Law enforcement officials would maintain their "stern"" approach to traffickers and their "shoot to kill" policy if suspects were armed and resisted arrest, said Winarko.

But he added that Indonesia would not mimic the violent policies of Philippine President Rodrigo Duterte, who was praised by his predecessor, Waseso.

"We have our own standard operating procedures," he said.

More than 4,100 people have died during police anti-narcotics operations in the Philippines since July 2016. Another 2,300 have been killed by unidentified gunmen.

The Philippine authorities say their actions are lawful and the deaths occur when suspects threaten police.

According to Amnesty International, Indonesian police killed 98 drug suspects in 2017, up from 18 the previous year. It said the deaths were rarely investigated.

McRea said the trend of rising drug-related slayings continued in Indonesia this year and was "disturbing".