Bung Moktar Radin, a member of Umno's supreme council - the opposition party's highest decision making body - was allegedly paid the sum as reward for diverting RM150 million from Felcra, a government owned company where he was chairman, into a unit trust fund.

The MP from Sabah is on trial jointly with his wife Zizie Ezette Abd Samad, The Star and other Malaysian media reports say.

According to the first charge, Bung Moktar obtained a RM2.2 million bribe from a Public Mutual investment agent through Zizie in June 2015.

In the second charge, Bung Moktar is accused of corruptly obtaining a RM262,500 bribe from the same person through a growth fund account registered under Zizie's name, on the same day in 2015, The Star reported.

The third charge accuses Bung Moktar, 60, of obtaining a RM337,500 bribe from another Public Mutual investment agent through a mutual fund account under the politician's name.

Both the federal lawmaker and his wife, 41, have pleaded not guilty.

Zizie is an actress and drama producer.

Felcra, formerly the Federal Land Consolidation and Rehabilitation Authority, manages 257,000 ha of oil palm and rubber plantations along with rice fields, according to its website. 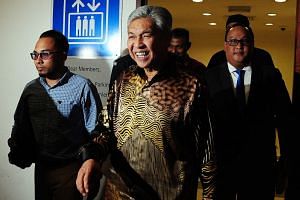 Felcra is a different entity from the other plantations management agency Felda.

With a string of defections in Sabah of Umno MPs and state lawmakers after the May 2018 general election, Bung Moktar has become Sabah Umno's most senior leader.

He is heading the by-election campaign in the East Malaysian state on Jan 18 for the Kimanis parliamentary seat.

With his trial, four prominent Umno leaders have been hauled to Malaysian courts.

Several other Umno leaders are also slated to face criminal trials since the Pakatan Harapan coalition took over the federal government in May 2018.