KOTA KINABALU (THE STAR/ASIA NEWS NETWORK) - French tourist Thiery Brethes was preparing to sleep before his hike up the peak of Mount Kinabalu in the wee hours of the morning when an earth­quake shook the Ranau district.

The 44-year-old said he and his family felt severe shaking and heard loud rumblings at the Panar Laban resthouse, some 3,200m above sea level, at about 9pm on Thursday.

“We only realised it was an earthquake a few minutes later.

“There was a commotion as many of us came out of our rooms. We were immediately told to pack up as we would all be heading down the mountain,” he said.

Brethes, a first-time Mount Kina­balu climber, said it was scary as they were guided in the dark towards the gathering point at the Laban Rata helipad.

“I am thankful we are safe, though I feel a little disappointed that I couldn’t make it to the summit.

“I had prepared a lot for this climb and was really looking forward to conquering the peak.

“But I know this is for our safety and I am glad we are not hurt,” he said. Brethes added that apart from the earthquake scare, their visit to Mount Kinabalu had been a good experience.

He was among the 130 climbers who reached the Timpohon gate safely at 4.30am yesterday as Sabah Parks closed the park indefinitely for safety reasons. 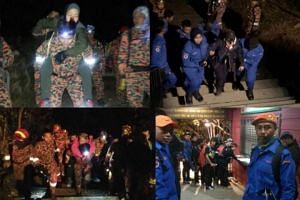 No reports of Singaporeans injured in Sabah earthquake

The move to halt operations up the mountain came after Universiti Malaysia Sabah geologist Prof Dr Felix Tongkul urged people to brace themselves for aftershocks from the 5km-deep earthquake that hit about 15km north of Mount Kina­balu towards the Kota Marudu district.

The relatively shallow earthquake triggered a strong jolt that was felt in Kota Belud, Tampa­ruli, Kiulu and the city here.

Residents in areas such as Penampang and Papar also reported feeling the tremors.

According to the Malaysia Meteo­r­ological Department website, at least three aftershocks were de­­tected in the area at 9.27pm (2.8-magnitude) and 10.53pm on Thursday (3.2-magnitude) and ano­ther at 8.09am yesterday (3.1-magnitude).

Prime Minister Datuk Seri Najib Tun Razak, in a tweet, said he hoped all those affected by the quake were fine and that the Government was prepared to provide assistance if needed.