CHIANG RAI, BANGKOK (AFP, Reuters, The Nation/Asia News Network) - Classmates of 12 boys trapped in a flooded Thai cave spoke of their hopes for a miracle rescue on Monday (July 2), as divers inched through thick mud and water towards an air pocket where the group is believed to be.

There has been no contact with the boys, aged between 11 and 16, since they went missing with their coach after a football practice on June 23.

The massive rescue effort has been hampered by heavy rain that flooded the Tham Luang cave in northern Thailand, blocking access to chambers where it is hoped the group will be found alive. Divers took advantage of a brief window of good weather on Monday to edge further into the cave, with forecasters predicting a return of wet conditions on Wednesday (July 4).

Rescuers in Thailand on Monday scrabbled to clear a constricted passageway for divers deep inside the flooded cave complex, which runs for 10km beneath the mountains in northern Chiang Rai province.

Scuba divers who are of smaller build on Monday joined Navy SEAL divers as the search team attempted to navigate a narrow passageway leading to the so-called “Pattaya Beach" where the boys could have sought shelter. Aside from belongings left at the mouth of the Tham Luang cave and handprints on cave walls, there has been no trace of them found since.

With the way out of the cave blocked by floodwaters from the heavy rain, rescuers are hoping that the boys made it through to an elevated rock mound that cavers have nicknamed "Pattaya Beach" after one of Thailand's best-known tourist destinations.

Friends and teachers of the "Wild Boar" football team refused to give up hope of seeing the young players again.

Tilek Jana, 14, whose friend Prajak is among the missing, expressed his wish that his friend will soon return.

"Let him come and let's play (football) together, I miss him," he told AFP. 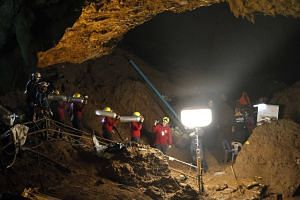 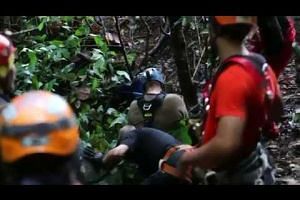 Missing Thai boys: Still no sign after a week

At Mae Sai Prasitsart school, where six of the missing boys studied, special prayers were held for the junior soccer team during the morning assembly on Monday.

"I am really worried, but I am hopeful because my friend is strong," Thanakorn Ingsilapakul, 15, told Reuters.

The school principal said it had been a painful week.

"We chant and pray and send our support to them to give them power to wait for help to arrive," Kanet Pongsuwan told AFP.

The search for the boys has gripped the nation, with news bulletins dominated by updates on progress made by a mammoth rescue effort involving more than 1,000 personnel.

Divers from a Thai navy Seal unit have been at the forefront of the search, supported by international rescue teams from the United States, Britain and Japan and elsewhere.

"The Seal unit last night reached the T-junction and today they will press ahead to the left, but one obstacle we've found is a very small hole which we need to widen so that people can go through," Chiang Rai Governor Narongsak Osatanakorn told reporters on Monday.

"As of now, we have not yet reached Pattaya Beach," he said.

He added that an operations centre has been set up in what rescuers call the cave's third chamber, about 1.7km from the cave's entrance.

Narongsak added that water from the flooded cave has receded in recent days, allowing rescue teams to gain ground.

The seasonal rains have hampered an increasingly desperate search operation, with divers groping their way along the walls of the flooded cave, barely able to see in the muddy water.

As part of the rescue effort, search parties have been lowered down shafts on the mountainside, but it was unclear what progress they had made.

Doctors say the boys could survive for many days without food, but much would depend on whether they found water clean enough to drink.

Officials have dropped survival kits with food, medical supplies and a cave map into a crevice, in the hope that some of the relief will reach the boys.

At 10km long, Tham Luang cave is one of Thailand's longest and one of the toughest to navigate, with its snaking chambers and narrow passageways. A sign outside the site warns visitors not to enter the cave during the rainy season between July and November.