NARMAKHOR, MYANMAR (AFP) - With artillery exploding around her village in Myanmar's northeast, 70-year-old Nan Nyunt fled to a monastery, one of thousands of civilians trapped between rebel groups who are fighting for influence as a China-driven economic boom looms.

"Houses were on fire and a buffalo died," she told AFP, huddled on the floor with other elderly displaced people.

She is one of several thousand forced to flee their homes - many multiple times - since fighting flared up in November in this normally peaceful area popular with tourists, who arrive by train from Mandalay to explore the hills.

"I'm still scared but I just want to go back home," she said.

Swathes of Shan state - like many of the country's restive borderlands - have been embroiled in conflict for decades.

The unrest is fiendishly complex, with a web of ethnic armed groups fighting Myanmar's military for land, resources and autonomy. 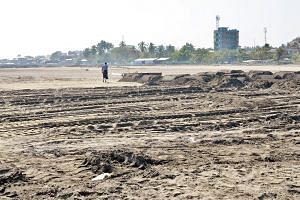 Hope and fear in Myanmar town seen as next Chinese outpost

Beijing, which already invests heavily in ports, pipelines, dams and mines across Myanmar, is now looking at scaling up projects in the border area of Shan.

Special economic zones are planned, while a high-speed rail link and expressway are expected to bisect the country, reaching the Chinese-built port of Kyaukphyu in Rakhine State on the Bay of Bengal.

"(It) is going to be astonishingly lucrative and they (ethnic armed groups) all want their cut," he explained.

There have been cyclical attempts by Shan rebel factions to encroach on rivals' territory, but now they are turning on each other with increased ferocity.

China is pumping investment into infrastructure schemes across the region and all the way to Europe as part of its Belt and Road project.

But Myanmar, one of South-east Asia's least developed countries, has a complicated relationship with investment from its northern neighbour.

A Chinese-funded dam at Myitsone on the Ayeyarwady river in northern Kachin state was mothballed in 2011 after widespread protests over the environmental damage likely to be wrought while returning little to local people.

But Myanmar is now under pressure to revive the scheme.

If completed, the US$3.6 billion project would flood an area twice the size of Singapore and displace thousands.

It was eventually signed off in November, but scaled down to a cost of US$1.3 billion.

One of the rebel groups now on the offensive is the Restoration Council of Shan State (RCSS).

Its stronghold is in the south of Shan state, but it is eyeing territory in the north, the bastion of the Taaung National Liberation Army (TNLA) and Shan State Army (SSPP).

Meanwhile, the still-powerful military - known as the Tatmadaw - has declared a temporary ceasefire in Shan.

Observers believe curbing operations in Shan also helps show China that Myanmar is committed to their joint projects - even if rebel groups continue to fight among themselves.

"The Tatmadaw can just sit back, build up its forces and watch them kill each other," said Mathieson.

Back in the monastery civilians are caught between factions warring over a bonanza they are unlikely to ever benefit from.

Young children learn a song through animal actions while the older kids chant through a Shan language lesson, hoping to be able to return home to take upcoming exams.

Most people here claim they do not know who is fighting - forced recruitment by armed groups is common and nobody wants their family to become a target.

Tin Sein, 60, leader of the displaced community at the monastery, said they have sent letters to "both sides" imploring them to stop the violence.

"We just want to live peacefully," he said.