CHON BURI, PATTAYA - A 35-year-old Chinese tour guide has been trampled to death by a bull elephant after he tried to save his tour group from the mammal at an elephant camp near Pattaya, reported Thai media.

Thai media reports said a misbehaving Chinese tourist had provoked the mammal by pulling its tail, but Thai police have yet to ascertain if that was the cause of the incident. Investigations are still ongoing.

Some of the tourists in Mr He's group told news site thecover.cn that nobody pulled the elephant's tail and that it just got angry suddenly.

They claimed that he was killed while trying to save an elderly woman.

"He gave his life to save others," 19 eye-witnesses wrote in the statement. "He is a true hero."

A couple from Shanghai who were riding the elephant claimed the mahout had hit the animal several times in the run-up to the attack, reported Chongqing news website CQNews.

The owner of the elephant camp and an elephant handler, or mahout, have been charged with recklessness causing death and injuries, reported Bangkok Post.

The incident took place last Thursday (Dec 21) afternoon when the tour guide, Mr He Yongjie, and his group of around 30 holiday-makers arrived at the Sam Liam Thong Kham elephant camp in Bang Lamung district, which is close to Pattaya.

Two tourists returning from an elephant ride were still on top of the 17-year-old bull elephant named Plai Uthen when some of the Chinese tourists rushed to take pictures of the mammal.

While they were posing next to the elephant, one of the tourists pulled its his tail, reported Chiang Rai Times, quoting eyewitnesses.

The startled elephant then charged into the crowd. The tour guide scrambled to protect members of his tour group and was caught in the path of the beast which knocked him down and trampled him to death.

Several mahouts rushed over to try to get the elephant under control. Police and rescue workers reached the scene at around 5.30pm on Thursday.

"The elephant was taking tourists back to the main area. Suddenly the tourists gathered round the elephant," mahout Au Yungung, 37, told Chiang Rai Times.

"One of them pulled the tail and the elephant began attacking people. I tried to control the elephant but could not save the leader of the group," he added.

One of the two tourists riding the elephant fell off its back in the mayhem while the other managed to hold on until a mahout managed to calm the animal. 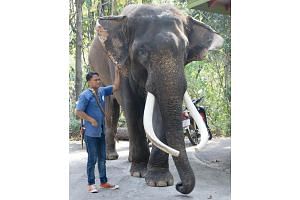 They were among the three who sustained injuries in the rampage. A third person, a 54-year-old Chinese tourist, was treated for a punctured rib and lung.

Security guard Sakda Malee told Bangkok Post that some tourists were hurt after they fell while fleeing the scene.

Mr Rangsan Panawatanakul, manager of the elephant camp, said on Friday (Dec 22) that the elephant ride service had been suspended pending the repair and construction of fences to keep visitors away from the paths used by the elephants.

He expressed his condolences to the victims, adding that if a visitor had not annoyed the elephant, it would not have attacked anyone.

There had never been such an incident at the camp before, he said.

The elephant camp will pay for the treatment of the injured tourists and offer compensation to the relatives of the dead tour guide, in addition to the one million baht (S$40,900) insurance payout.

The elephant would also be retired from giving rides.

China's state media CGTN reported that Mr He's family has refused monetary compensation of 400,000 yuan (S$81,900). The family told the Guangzhou-based Southern Metropolis Daily the offer was "unacceptable" and that they wanted to know the truth as soon as possible.

Chinese media reported that Mr He had tried to drag a Chinese tourist away from the elephant which suddenly went crazy.The elephant then redirected its aggression towards the tour guide, according to a statement made by an eyewitness and circulated online.

"Though there are rumors that some Chinese tourists might have irritated the elephants, the reason the animals went wild remains unclear," Mr Zhong Yi, deputy director of Chongqing Association of Tour Guides, told China Daily.

China's tourist office in Bangkok has asked the Thai authorities to determine the truth as soon as possible. The tour group returned to the Chinese city of Chongqing on Monday.

Last month, a famous elephant called Ekasit, which had starred in films and commercials, killed its owner, setting off fresh debate over the kingdom's animal tourism industry.

The accident took place in the northern city of Chiang Mai, just after owner Somsak Riengngen unchained the five-tonne elephant.

With a mahout, or handler, on his back, Ekasit took a few steps before reversing course and attacking 54-year-old Somsak, who was on the ground.

More than 2,100 elephants work at tourist sites in Thailand.