The two men also talked about bilateral and regional issues as well as investment and transport during their 90-minute meeting. Chinese Ambassador to Malaysia Bai Tian attended the talks.

In his Tuesday meeting with Malaysian Foreign Minister Saifuddin Abdullah, Mr Wang expressed China's confidence in the Mahathir administration and said his visit was a "clear message to both countries and the international community that China attaches high importance to its relations with Malaysia".

These include the East Coast Rail Line linking the east and west coasts of Peninsular Malaysia and two uncompleted gas pipelines.

The RM10 billion pipeline projects were awarded by Suria Strategic Energy Resources (SSER), owned by the Ministry of Finance, to China Petroleum Pipeline Bureau in November 2016. The Chinese company received 88 per cent of the project payment despite only completing 13 per cent of the work. 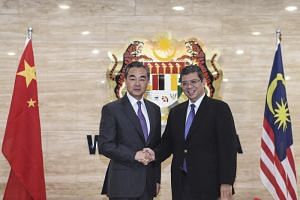 Malaysia's anti-graft agency is now investigating the pipeline projects over claims that part of a loan from Export-Import Bank of China to SSER to fund the pipelines was instead used to pay debts of troubled Malaysian state fund 1Malaysia Development Berhad.

"We wish to make it very clear that all funds from Export-Import Bank of China were only paid directly to CPP's bank accounts," it said, adding that this was in accordance with anti-money laundering banking rules, regulations and signed legal agreements.