MANILA - Foreign ministers from Southeast Asia and China adopted on Sunday (Aug 6) the framework of a code of conduct (COC) on maritime disputes, paving the way for actual negotiations on the code to take place.

Chinese Foreign  Minister Wang Yi said negotiations would start this year, and whatever agreement is made must be adhered to.

The framework emphasises that the COC “is not an instrument to settle territorial disputes or maritime delimitation issues.” 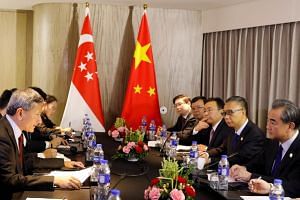 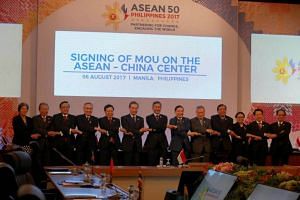 It instead promotes “mutual trust, cooperation and confidence, prevent incidents, manage incidents should they occur and create a favourable environment for the peaceful resolution of disputes”.

Mr Wang  said the framework will now be elevated to the leaders, who are expected to instruct both sides to take steps towards actual negotiations for a COC.

“First step, 11 ministers passed or approved the COC framework, announcing that we will start actual negotiations of the COC within the year,” he said.

He added that at a working meeting to implement a 2002 declaration that calls on claimants to exercise restraint and stop new occupation in the South China Sea, “various parties will together explore the thinking, principles and plan behind the actual negotiations of the COC, so as to make necessary preparations to reach a consensus between Asean and China”.

“Third step, with the South China Sea stable and no interference from external parties, we will then consider announcing the formal beginning of negotiations of the text of the COC when the leaders of China and Asean meet in November,” he added.

Finalising the code has acquired urgency due to series of confrontations between China and other claimant states. China claims nearly all of the resource-rich South China Sea that is also claimed by Asean  members Vietnam, Malaysia, Brunei and the Philippines.

Efforts to finalise the COC pact have dragged on for years without any sign that such accord will ever be achieved.

The framework does not, however, cover discussions on whether the COC should be legally binding. That will have to be thrashed out during discussions on the code itself.

“A framework is a framework. But the framework will hopefully pave the way towards meaningful and substantive negotiations towards the conclusion of a COC. It must be able not only to prevent but also to manage incidents of the kind that have taken place so far. For that COC to be effective, it will have to be legally binding,” he said.

Asean has long held the position that the COC must be legally-binding, but China opposes this. It is not clear how this basic difference will affect progress of future efforts by both sides to negotiate the code.

Philippine Foreign Secretary Alan Peter Cayetano earlier hinted that he is open to an accord that is not legally binding if it will expedite the negotiations.

“We push for the legally binding but we also open up our minds to anything that will move us forward,” he told a news conference last week.

“Because if we go backwards, we have instability.”