In a Thai-language post on Facebook on Thursday (Oct10), the embassy alleged that protesters in Hong Kong were working with external groups to spread false information in order to separate Hong Kong from China.

Without naming Mr Thanathorn - the leader of Thailand's Future Forward Party - it said: "Some Thai politicians have linked up with those wishing to separate Hong Kong from China in a supportive manner, which is a serious offence and irresponsible.

"China hopes that the relevant people will acknowledge the truth about Hong Kong and be careful. Do things that will benefit the Chinese-Thai friendship."

Mr Thanathorn, a wealthy businessman, co-founded the youth-oriented Future Forward Party which managed to win the third highest number of Lower House seats in Thailand's March general election. He has, however, been suspended from parliament pending a Constitutional Court decision over a share ownership case.

On Oct 5, Mr Wong had uploaded a picture of himself with Mr Thanathorn, who he had met at The Economist magazine's Open Future Festival in the Chinese territory.

Mr Wong described Mr Thanathorn as the leader of a progressive party that demanded that the military withdraw from politics but is currently being sued for sedition and may end up in jail.

"(I) hope that, as conservative forces or authoritarianism advance in Asia-Pacific, we can continue to promote exchanges in East Asia, and advocate for democratic progressive values." 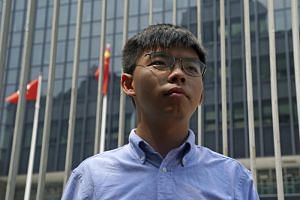 In Hong Kong's leaderless movement, officials don't know who to negotiate with

Mr Thanathorn responded on Friday afternoon (Oct 11) to the Chinese statement, writing on Facebook that he met Mr Wong for the first and only time during the Open Future Festival, and that they spoke for five minutes.

"I have never been involved in any political groups in Hong Kong and have no intention to do so in the future. My and the Future Forward Party's mission is to create democracy and progress for Thai society."

He added: "In an international seminar, it's normal to meet and talk to people with many different ideas."

Urging people not to read too much into his photo with Mr Wong, Mr Thanathorn said he supported Hong Kong's Basic Law, which guarantee that the rights and freedoms that Hong Kong people enjoyed while it was a British colony will be preserved for 50 years after Hong Kong's 1997 handover to China.

"I always support the rights of people to exercise their freedom of expression peacefully. I wish to see Hong Kong's situation resolved. I don't want to see violence against both the people and government officials.

"The best way is to restore faith and trust between officials and citizens, and not take any inappropriate measures."