PUTRAJAYA  - China’s Foreign Minister Wang Yi has expressed confidence in the Malaysian government led by Prime Minister Mahathir Mohamad, saying that the country will stay united and prosper under the new administration.

“As Malaysia’s good friend, China is happy to see these achievements that Malaysia has made and we have confidence that under Dr Mahathir’s leadership, Malaysians will stay united and will achieve new glories,” said state councillor Wang at a joint press conference with his Malaysian counterpart Datuk Saifuddin Abdullah in Putrajaya Tuesday night (July 31).

Mr Wang is on a two-day official visit to Malaysia and will call on Tun Dr Mahathir on Wednesday.

“I’ve come to Malaysia at the early stage of the formation of the new government to send a clear message to both countries and the international community that China attaches high importance to its relations with Malaysia,” said Mr Wang.

“The reason ... is because of a long standing friendship between the two, and most importantly, Malaysia and China are developing countries - we both follow independent policy, we both believe in Asian values, and we both oppose all forms of power politics ... in other words, common interests.” 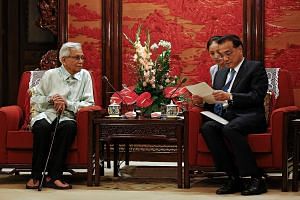 Malaysia stumbles in rapprochement with China

Since winning the May general election, Malaysia’s Pakatan Harapan government has reviewed nearly RM100 billion (S$33.7 billion) worth of infrastructure contracts awarded to Chinese state firms by the previous administration, in a bid to tackle government debt of over RM1 trillion.

These include the East Coast Rail Line linking the east and west coasts of Peninsular Malaysia and two uncompleted gas pipelines.

Despite these stalled projects, Kuala Lumpur remains open to economic cooperation with Beijing.

“As a trading nation and a pro-business government, I assured His Excellency that Malaysia welcomes China’s participation in our economic development, as long as it is aligned with Malaysia’s national interests and is carried out based on principles of equality and mutual respect,” said Mr Saifuddin.

He said his meeting with Mr Wang discussed ongoing bilateral cooperation in areas of trade and investment, education, tourism, agriculture and security.

Mr Wang said China respects “the choice made by the Malaysian people” and supports Malaysia in following the path of development that suits the country’s own national conditions.

“We believe that the joint efforts between China and Malaysia in undertaking the Belt and Road Initiative will open up a greater prospect between both sides, especially in achieving the vision of governance laid out by PM Mahathir,” said Mr Wang.

Mr Saifuddin added that both countries also agreed on the importance of maintaining peace and stability in the region on the South China Sea issue.

“Disputes should be addressed through peaceful means, including through regional dialogue and discussions amongst the parties concerned, without resorting to threats or the use of force,” he added.

Dr Mahathir is set to travel to China on Aug 17, after the current Parliamentary sitting ends.

Meanwhile, after concluding his Malaysia visit on Wednesday, Mr Wang will leave for Singapore and attend a series of foreign minister meetings until August 5.