ALOR SETAR (THE STAR/ASIA NEWS NETWORK) - An estimated 12 million girls are married every year before they reach the age of 18. That is more than over 32,000 girls a day. Or almost 23 girls every minute who are being married off too soon.

When a young girl becomes a bride, the consequences are lifelong for the girl, her children, and for her nation.

The young brides are often isolated, with their freedom curtailed, and they may feel disempowered and deprived of their fundamental rights to health, education and safety.

According to international standards, child marriage is defined as any marriage carried out below the age of 18.

In Malaysia, it is still legal for children below the age of 18 to be married under Islamic and civil laws.

Under civil law, non-Muslims can only marry from the age of 18. But non-Muslim girls can marry as young as 16, provided they get the permission of the Chief Minister or Menteri Besar.

For Muslims, the minimum age of marriage is 16 for girls and 18 for boys, but exceptions can be made for girls or boys to marry at a younger age as long as they obtain the Syariah courts' consent.

Customary law, meanwhile, sets the minimum age to get married for girls at 16 and 18 for boys - a parent or legal guardian may give their written consent for underage marriages. 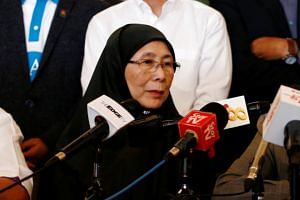 More recently, the Syariah Judiciary Department revealed that a total of 10,240 child marriages among Muslims were recorded from 2005 to 2015.

That translates to an average of 1,024 Muslim children getting married every year.

For non-Muslims, the National Registration Department revealed that a total of 2,104 girls were married at the age of 16 over the span of five years from 2011 to September 2015. Based on that data, that means around 420 non-Muslim girls under the age of 18 are getting married every year.

"A recent interview conducted by a Sawo volunteer in Keningau and Telupid revealed that many teenagers between the ages of 13 and 19 were married off," says Dr Easwary.

She cites poverty and lack of education as the main reasons for child marriages in Sabah.

"Poor enforcement of policies and laws pertaining to child marriage and the lenient attitude of religious and community leaders that allow young girls to marry is also a problem," she adds.

"Parents raising a female child might prefer to marry their daughter off, for fear that she might indulge in premarital sex and bring shame to the family by getting pregnant out of wedlock."

Dr Easwary, who is a public physician by profession, highlights that child marriage affects the child mentally, physically and emotionally.

"Child brides are at greater risk of experiencing dangerous complications in pregnancy and birth that can put the mother and child at risk."

There should be zero tolerance to child marriages, she stresses, "They should remain children, rather than become wives or mothers."

"An overwhelming number of people believes that child marriage is not right and something that should be stopped," says Unicef senior social policy specialist Amjad Rabi. "However, there is still a percentage that still thinks child marriage is okay. But I think this is largely due to misinformation and the lack of understanding."

Dr Amjad urges people to think about whether they want their own daughter or granddaughter or niece to get married below the age of 18.

"Every father wants the best for their daughter. They want their daughter equipped with education so that she can become a strong and independent woman. Education is so important," he says.

However, child marriage often means the end of education for girls, Dr Amjad points out.

"Many child brides drop out of schools or have no access to education, so these girls won't receive the opportunities an education might give them, they will be working in low-paying jobs that has less reward."

For Malaysia to become a developed country, Dr Amjad says it is crucial for us to end child marriage.

"There is no developed country that has a common practice of child marriage. We need to empower the child and bring him or her to their full potential.

"Malaysia needs its children to stay in school and later become part of the workforce. We need the contribution of everyone in order to be a productive country that will propel Malaysia to developed status."

In their recent report Child Marriage: Its Relationship with Religion, Culture and Patriarchy, Sisters In Islam (SIS) and the Asian Pacific Resource and Research Centre for Women (ARROW) highlighted that the main factors behind local child marriage cases are religious conservatism, patriarchal beliefs and reasons of sexual impropriety.

SIS communications manager Majidah Hashim says: "Cultures and societies change throughout the centuries. The situation of the girl child in medieval time is a completely different reality from the girl child of 2018."

Child marriage violates girls' basic rights to health, education, to live in safety and to choose when and whom to marry, adds Ms Majidah, highlighting that several Islamic countries have changed their laws to set the minimum age of marriage at 18, including Egypt, Pakistan (Sindh Province), Morocco, Oman, Turkey and Algeria.

Voice of the Children chairperson Sharmila Sekaran feels we should not be afraid to talk about sex to youths.

"There is a lot of vilification and criminalisation of a very natural activity, that is something that we have to step away from. We need to stop being afraid of sexuality," she says, underlining the importance of talking about sex in the "right kind of setting" and bringing the topic out in the open.

"We are not teaching our children to go out and have sex, but to respect bodies, how they can say no, and to avoid indulging in sex," she says.

"But for whatever reason they feel like they need to indulge in sex, they should know the risks and how to take precautions. If you don't tell a young person, how would they know?"

She stresses that child marriage should not be used as a tool to try resolve social problems such as premarital sex and teenage pregnancy.

"Civil society organisations have done studies and research whereby the data indicates that a lot of these marriages don't last. Very often the girl is left with the offspring of the marriage and the man moves on.

"It is not as if you are getting these girls married, and it is happily-ever-after. Within months or years, they often get divorced and move on," she says.

"Child marriage is not resolving the issue, you are creating an even bigger social problem because you got young women and children stuck in a poverty cycle."

DAP Wanita publicity secretary Kasthuri Patto is campaigning for the Government to set the minimum marriage age to 18, with no exceptions.

"We cannot be in denial of this problem any longer. We must ensure that we as a nation are making a stand against child marriage," she says.

"We must have no exemptions or special cases where child marriage is allowed."

Ms Kasthuri points out that Pakatan Harapan has already pledged to set the minimum marriage age at 18 in their manifesto, and she plans to ensure that Pakatan's promise is fulfilled.

"The next step is speak to civil organisations and other members of Parliament, and meet with the Women's Minister Datuk Seri Dr Wan Azizah Wan Ismail to make this pledge a reality," she says.

"With children getting married at a young age, they tend to have children soon after, which leads to health complications with their pregnancies. They are also more likely to suffer from domestic violence and drop out of school, which will lead to stunted knowledge," she says.

"Malaysia as a signatory of the United Nation Convention on the Rights of the Child also has a moral duty to put her foot down and once and for all put an end to child marriages."

Echoing Ms Kasthuri, Girls Not Brides chairman Princess Mabel van Oranje of the Netherlands says that child marriage is a global problem that cuts across countries, cultures, religions and ethnicities.

"When parents marry their daughters off because they think it is the right thing to do, it is actually very harmful, not just for the girls, but for their families and communities," she says, citing a 2017 report published by the World Bank and the International Centre for Research on Women (ICRW), which indicated that child marriage will cost developing countries trillions of dollars by 2030.

"Countries can save trillions of dollars if they end child marriage because children will stay in schools and have have more earning power, they will save in the cost of healthcare, when people have babies later they will also have fewer babies that has an effect on population growth," she says.

"There is a long list of reasons that basically tell you that if you want to create a world without poverty, we have to end child marriage. It is the economically smart thing to do," she says.

Princess Mabel is nonetheless optimistic in seeing Malaysia reform their laws to ensure that the minimum age of marriage is set at 18 for all.

"I hope to see this change in both Malaysia's civil law and Islamic law. That means the Government needs to work together and unite forces with United Nation organisations and civil societies to come up with concrete programmes to help end child marriage," she says, reiterating that Malaysia without child marriage would be "a Malaysia that is better educated, healthier, more prosperous, and more equal".