JOHOR BARU - The Malaysian government has identified the chemical waste that was illegally dumped into a river in Johor Baru on Thursday (March 7), that made several dozen people ill.

The Johor Department of Environment (DoE) director Mohammad Ezzani Mat Salleh said the substance was an oil-based mixture that emits methane and benzene fumes, according to Malay Mail news site.

"The oily substance is believed to be oil waste commonly used in marine engine compressors and is considered scheduled waste that needs to be disposed off properly under the law," he was quoted as saying on Friday.

"Based on our investigations, we estimate that around 20 to 40 tonnes of the oil waste were illegally dumped into parts of the Sungai Kim Kim river," Datuk Mohammad Ezzani told Malay Mail when contacted.

The waste substance may have come from marine engineering or petrochemical factories in Johor.

News reports on Thursday say dozens of people, including 18 students, were admitted to hospital after inhaling gas from the dumped waste substance in the Pasir Gudang area.

Some of the adults were canteen workers at the Pasir Putih government schools. 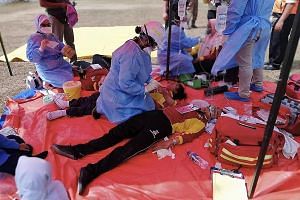 Toxic gas from river in JB sends dozens to hospital

"At present, we have managed to contain the situation," he said, as quoted by Malay Mail.

Mr Mohammad Ezzani said the department aims to identify, nab and prosecute the culprits responsible for the illegal dumping.

"A formal report has been submitted and, based on eyewitness accounts, the dumping was done from a tanker lorry during pre-dawn hours on Thursday," he told the news site.

The waste substance may have come from marine engineering or petrochemical factories in Johor.

On the cleaning-up efforts, Mr Mohammad Ezzani said the bulk of the oily substance on the river's surface has been disposed off.

But it will take at least two more days to clear the remaining residue that affects some 5km of the river, he was quoted as saying.