JAKARTA - President Joko Widodo appealed on Friday (Aug 16) to all the branches of government - executive, legislative and judicial - in Indonesia to work together to make sure the nation progresses faster and is competitive in the international arena.

He also, for the first time, officially requested support from Parliament to move the Indonesian capital to Kalimantan.

Mr Joko, popularly called Jokowi at home, was speaking in two speeches on Friday morning, ahead of Indonesia's Independence Day on Saturday.

Calling for unity and solidarity during his first speech, he said checks and balances among the government (executive), Parliament (legislative) and the Supreme Court and Constitutional Court (judicial) are very important, but everyone must have the same ultimate goal - to make sure Indonesia progresses.

He also invited all the branches of government to build synergy and carry out their respective roles to help create situations conducive to eradicating poverty, reducing inequalities and creating as many jobs as possible.

Mr Joko underlined, without elaborating, that all parties must be involved in creating quality human resources and tackling the threats of intolerance, radicalism and terrorism.

In the speech, which was dedicated to issues related to the three branches of government, Mr Joko expressed appreciation to Parliament that has, in the year to date, finished deliberating on 15 Bills, including those on international cooperation, public health and science.

He said Parliament and the government must work together to harmonise any laws that are in conflict with one another, and amend laws that do not benefit the people.

He also praised the Supreme Court for going digital, allowing for online registering and monitoring of cases.

On the proposal to move the capital out of Jakarta, he said in his second speech: “On this historical opportunity, may God bless us, I would like to ask for approval and support from the Parliament, from the seniors and prominent figures across Indonesia, that I hereby would like to move our capital to Kalimantan.

“A capital that does not only symbolise the nation’s identity, but also represents that nation’s advancement. This is for us to achieve equality and economic justice. This is for the sake of Indonesia Forward vision. Indonesia that survives eternally.

“The development that we are doing must be Indonesia-centric, meaning it benefits people from all walks of life across the country.”

Mr Joko had also pledged that he would reduce red tape, saying: “We cannot be trapped in inflexible regulations, complicated formalities… that in fact burden the people and businesses. We must stop this.”

He added that regulation should not threaten anyone and impede innovations, pledging that regulations that are inconsistent, overlapping one another, and do not accommodate technology advancement must be harmonised, simplified or scrapped.

On foreign affairs, Mr Joko said that humanity must be the main reference of Indonesia’s foreign affairs policy, adding that the South-east Asian country would continue to contribute to world peace, and global prosperity.

He is set to begin his second five-year term in office in October after being re-elected several months ago following a bitter and divisive presidential election in which he secured 55.5 per cent of the total votes. 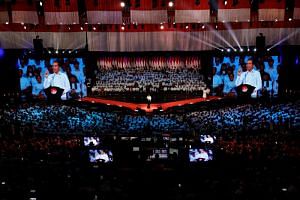 Mr Joko is set to make a third speech in the afternoon, which is reserved for the President to officially disclose his administration's proposed spending budget for 2020, that would later be deliberated for approval by Parliament, slated for October or November.