PHNOM PENH (REUTERS) - US embassy officials in Cambodia can leave if they do not like it there, a Cambodian government spokesman said on Thursday (Aug 1), following criticism by US diplomats that the Southeast Asian nation's 2018 election was deeply flawed.

In a Facebook post on Tuesday marking a year since the vote, the US embassy in Phnom Penh, the Cambodian capital, said the election had "failed to represent the will of the Cambodian people".

US officials should not make such "barbaric comments", government spokesman Phay Siphan said in response.

"Although we are friends, if these officials don't like Cambodia, they should pack up and leave. Let me be clear: We don't welcome you," Siphan told a regular news conference on Thursday.

Siphan said he was referring to a Twitter posting last month by US President Donald Trump telling four ethnic minority Democratic congresswomen to "go back" to the "the totally broken and crime infested places from which they came".

"We have the same right to speak as President Donald Trump. It's simple. If you don't like it here, leave," Siphan said.

A spokesman for the US embassy declined to comment.

Tuesday's Facebook post said the 2018 election excluded the main opposition Cambodian National Rescue Party (CNRP), which was dissolved by the supreme court in 2017. 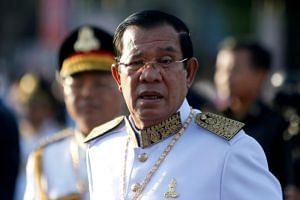 It also banned 118 of the CNRP's elected officials from politics for five years.

The party's leader, Kem Sokha, was released from prison in 2018 after spending more than a year in jail on treason charges.

He has been under house arrest in Phnom Penh since last September following a government-led crackdown against its critics.

Cambodia has for years faced criticism for human rights violations and has increasingly turned towards its main ally, China, for diplomatic and financial support.

Its military ties with China have drawn increased scrutiny after concerns expressed by the United States and a media report, denied by Hun Sen, of a secret deal to allow Chinese forces to use a naval base in the country.