Her call came after the IMF projected that the world economy will only expand by 3.7 per cent this year, 0.2 percentage point below its forecast six months ago.

Ms Lagarde said on Thursday (Oct 11) that escalating trade disputes have an adverse impact on "innocent bystanders" - a reference to countries that are not involved in the conflicts but are part of supply chains linked to these nations.

"My recommendation is very simple: De-escalate, fix the system and don't break it because all countries have had the benefit of that legal framework for many years and it has served the international trade rather well," Ms Lagarde said at press conference during the IMF-World Bank meetings in Bali.

She suggested that negotiating some World Trade Organisation (WTO) rules pertaining to state subsidies and measures to embrace competition to avoid market-dominant positions must be at the centre of efforts to lessen these disputes.

"Those issues need to clarified, need to be understood and need to be agreed, which is why we start to advocate the de-escalation, sitting around the table and actually improve the system as it is so that it works better for all, so it is fair in many ways," she said. 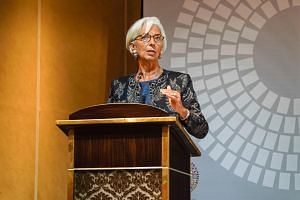 Reducing agriculture subsidies has been one of the sticking points in talks to revise trade rules among the 164-member WTO for nearly two decades under the Doha Round.

Developed economies have refused to lift agriculture subsidies as demanded by developing countries in exchange for a reduction of import duties on industrial goods.

WTO director-general Roberto Azevedo said in a discussion on Wednesday that major deals the body made in 2013, including a consensus to eliminate export subsidies in agriculture, made no significant progress.

In September, the global trade governing body, which covers around 98 per cent of commerce worldwide, trimmed global trade growth to 3.9 per cent this year, from the 4.4 per cent it estimated in April.

It pointed to the slower pace of trade expansion amid tariffs affecting exports of big economies as well as tougher credit controls in the global market.

World Bank Group president Jim Yong Kim told a separate briefing that he was deeply concerned that the intensifying trade tensions have caused a slowdown in the world economy and that they will bring greater impact on developing economies.

He described trade as "critical" to the lender's agenda and acknowledged that it has enabled millions of people to pave their way out of extreme poverty.

"So what we are doing right now is trying to understand exactly where countries sit in the global value chain," Dr Kim said.