SIHANOUKVILLE, CAMBODIA (NYTIMES) - When Cambodia's prime minister greeted passengers on a cruise ship amid a coronavirus scare on Valentine's Day, embraces were the order of the day. Protective masks were not.

Not only did Prime Minister Hun Sen not wear one, assured that the ship was virus-free, his bodyguards ordered people who had donned masks to take them off. The next day, the US ambassador to Cambodia, Mr W. Patrick Murphy, who brought his own family to greet the passengers streaming off the ship, also went maskless.

"We are very, very grateful that Cambodia has opened literally its ports and doors to people in need," Mr Murphy said.

But after hundreds of passengers had disembarked, one later tested positive for the coronavirus. Now, health officials worry that what Cambodia opened its doors to was the outbreak, and that the world may pay a price as passengers from the cruse ship Westerdam stream home.

Before the Westerdam docked in Sihanoukville, fearful governments in other countries had turned the ship away at five ports of call even though the cruise operator, Holland America, assured officials that the ship's passengers had been carefully screened.

Mr Hun Sen's decision to allow it entry appeared to be a political calculus as much as anything else. The region's longest-serving ruler and a close ally of China, he is known for his survival skills.

But Mr Hun Sen's critics worry that the ageing autocrat might have acted rashly.

"Of course, he had to do the dictator thing: photo op, roses, exploit this for its maximum value," said Mr Sophal Ear, an expert in Cambodian politics at Occidental College. "Whatever is in the best interest of Cambodians is completely irrelevant to him."

It is too early to tell whether the decision to let hundreds of passengers from the Westerdam fly off has the makings of an epidemiological disaster. Cambodian health authorities said that 409 of the 2,257 passengers and crew had left Cambodia for their homes scattered across the globe. The rest remain in hotels in Phnom Penh, the capital, or on the ship.

But deficiencies in screening for the coronavirus aboard the ship, along with continued complacency about the epidemic in Cambodia, are raising fears this small South-east Asian nation could prove to be a surprising vector of transmission for a virus that has already killed more than 1,700 people, mostly in China, the epicentre of the outbreak.

Many health experts urge people who have been in contact with coronavirus patients to self-quarantine for 14 days, lest they add another spoke to the contagion network. 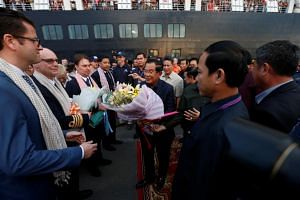 Passengers on ship turned away over coronavirus fears disembark in Cambodia

But on Monday (Feb 17), Mr Hun Sen directed officials in Phnom Penh to treat passengers from the Westerdam to a sightseeing jaunt.

"To tour the city is better than staying in rooms or at the hotel feeling bored or scared," said a post on Mr Hun Sen's Facebook page.

The lack of urgency in Cambodia, where officials milled around the ship Monday without protection, points to the obstacles in trying to contain a virus that experts warn is spreading faster than Sars (Severe acute respiratory syndrome) or Mers (Middle East respiratory syndrome).

"This is influenza-like transmission," said Dr Michael Osterholm, director of the Centre for Infectious Disease Research and Policy at the University of Minnesota. "It's like trying to stop the wind."

Last week, when the Westerdam docked in Sihanoukville, the Cambodian government and the cruise operator deemed the vessel virus-free. The declaration was at a minimum premature.

Only 20 people out of the 2,257 onboard were tested for the virus before disembarking, and that was because they had reported themselves to ship medical staff with various ailments.

The woman who twice tested positive after travelling on to Malaysia, an 83-year-old American, was not among those 20, Holland America said.

Health monitoring for the rest of the passengers was limited to a handful of temperature checks conducted with infrared thermometers, passengers said. In a statement, Holland America said that during one of those screenings, not a single person on board recorded an elevated temperature.

On Monday, an announcement broadcast to passengers remaining on the Westerdam warned that they should avoid the ship's hot deck and return to their air-conditioned rooms to avoid falsely high temperature readings.

Some health experts have questioned the efficacy of infrared thermometers, also known as temperature guns, saying they measure the heat emanating from the surface of the body, rather than core body temperature.

Trump thanks Cambodia over ship in rare message to China ally

"In Cambodia, you have warmer background temperatures," he said. "It could impact the measurement. That's the issue with any non-contact thermometer."

Even if temperatures are accurately gauged, people may be taking medication that lower their temperature, like some arthritis drugs. And in any case, people who are asymptomatic can still pass on the coronavirus, scientists have found.

"A person who does not present as feverish is not necessarily uninfected with a disease or a virus," said Mr Jim Seffrin, an expert on infrared devices at the Infraspection Institute in New Jersey.

In the wake of the positive test in Malaysia, Cambodian health officials said they would be relying on a domestic lab to test all passengers and crew members still in the country for the coronavirus.

On Monday evening, passengers celebrated news from Cambodian health officials that a first batch of 406 people in Phnom Penh had tested negative, although there was no certainty they would not later test positive.

"People on the ship are very grateful to the people of Cambodia," said Ms Tammie Graves, an American from Kansas. "I was a bit worried that they might be afraid of us, even at the hotel, but it hasn't been like that at all."

On Monday afternoon, more than 100 Westerdam passengers took up Mr Hun Sen's offer of a capital tour, piling in buses to see the royal palace and other sites. In pictures of the excursion, posted on a government-linked website, only one person can be seen wearing a mask.

Despite cases of coronavirus popping up in South-east Asia, Mr Hun Sen has campaigned against masks, arguing that they are better at spreading fear than stopping germs. At a news conference last month, he announced that he would kick out anyone who dared wear a mask.

Even as other governments instituted China travel bans that angered Beijing, Mr Hun Sen travelled to the Chinese capital and met with Mr Xi Jinping, China's leader, in another photo op.

And as other countries organised airlifts of people trapped in Wuhan, the city where the virus is believed to have originated, Mr Hun Sen said he would not ferry Cambodian students home because they should be "joining with Chinese to fight this disease".

The sense of solidarity makes sense in a country heavily dependent on China for its fortunes, after having turned its back on a West that was demanding progress in human rights in return for aid and investment.

A torrent of Chinese cash has remade Cambodia, nowhere more so than in Sihanoukville, a once sleepy beach town that is now a sprawling construction site of gilded casinos and towering residential blocks. More than 90 per cent of businesses in the city are now Chinese owned.

On Monday, Ms Oeun Yen, a masseuse here, worried about the massages she had given three female passengers from the Westerdam before the virus case was confirmed by Malaysia. She was not afraid at first, she said, because the prime minister had assured people all was fine.

"Now I am more concerned," she said.

In a country where Mr Hun Sen has dissolved the biggest opposition party and political assassination is not uncommon, such mild concern is as much as many ordinary residents are willing to muster.

But there is also widespread scepticism of the government's contention that only one person in Cambodia has tested positive for coronavirus, a Chinese citizen who has since returned home.

"There is a natural lack of credibility and trust associated with the Cambodian government," said Mr Ou Virak, a human-rights activist and founder of the Future Forum, a local think tank. "This is Hun Sen's Westerdam problem, because even if he was doing the right thing, purely as a humanitarian, he will be seen as the puppet of China instead."

On Monday, Mr Hun Sen announced yet another publicity stunt: He wants to invite the passengers of the Westerdam to a party. Masks won't be welcome.