PHNOM PENH (AFP) - Cambodian Prime Minister Hun Sen lashed out at critics on Thursday (Nov 8) for questioning high-level appointments bestowed on the strongman's children, denying that the promotions were part of a strategy to "strengthen power".

The 66-year-old leader has ruled Cambodia for 33 years and his administration is full of family-linked officials, with his three sons in key posts across the defence and intelligence establishments.

Mr Hun Sen has long shrugged off accusations of nepotism, but in a speech to students in Phnom Penh, he framed the promotions as a natural by-product of education and training.

"I read a media briefing sent to me this morning about Hun Sen promoting (his) children," he said.

"I want to ask everyone: Are my children human beings? Are they citizens?"

He said they had advanced degrees and had studied abroad.

"They say it is to strengthen power. We sent them for training. What should we train them for?" 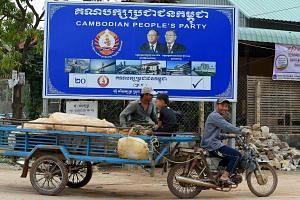 Analysts say Mr Hun Sen has stayed in power for decades through a mix of political savvy and loyal networks in the security forces, and that he is grooming his sons as possible successors.

Hun Manet, his eldest son, was promoted in early September to chief of joint staff of the Royal Cambodian Armed Forces as well as the commander of the infantry army headquarters.

He graduated from the US military academy at West Point and the government said his new responsibilities were merit-based.

Mr Hun Sen's second son Hun Manit is the head of a military intelligence unit and his youngest Hun Many is a parliamentarian who oversees the ruling party's far-reaching youth movement.

In July, Mr Hun Sen's Cambodian People's Party (CPP) won all seats in Parliament after holding an election without an opposition.

The Supreme Court dissolved the only viable party challenging CPP rule in November 2017 amid a wide-ranging crackdown on dissent.