PHNOM PENH (REUTERS) - The ruling Cambodian People's Party (CPP) will form a new government within 60 days, its spokesman said on Tuesday (July 31), two days after a general election that critics called neither free nor fair, after the main opposition was disbanded last year.

King Norodom Sihamoni will invite all of Parliament's new members-elect to a meeting to be held within 60 days of the July 29 vote, said ruling party spokesman Sok Eysan.

"After the meeting, a government will then be formed... there will be a new Cabinet," Mr Sok Eysan told Reuters. "It will be between September 25th and 26th."

"It was a farce, a sham election, it doesn't represent the will of the people," Mr Sam Rainsy told Reuters during an interview at his Paris apartment.

The CPP has said it won all 125 parliamentary seats up for grabs in an election heavily criticised by rights groups, the United States and other Western countries.

As Western nations cool ties with Cambodia, regional powerhouse China remains a close ally. By far the biggest investor in Cambodia, it is also its biggest trade partner and has voiced support for the general election. 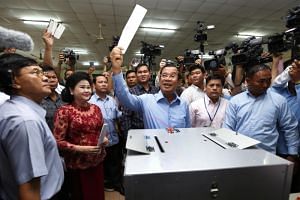 Cambodia's Hun Sen has an important election backer in China

China's Foreign Ministry on Monday said it hoped the international community would remain supportive of Cambodia.

Referring to Prime Minister Hun Sen, who has been in power for more than three decades, Mr Sam Rainsy said China was the "only backer of such a totalitarian regime".

Critics call the election a step backward for democracy, following last year's dissolution of the main opposition Cambodian National Rescue Party (CNRP) and the jailing of its leader, Kem Sokha, on treason charges.

"The lack of genuine electoral competition and the absence of an inclusive political process mean that the 29 July election is not representative of the democratic will of the Cambodian electorate, and therefore its outcome lacks credibility," the European Union said in a statement.

Opposition members had urged voters to boycott the election. Invalid and spoilt ballots accounted for 8.4 per cent of the 7.64 million votes cast, representing a protest against the election, the opposition and an analyst have said.

The White House said it would consider steps, such as an expansion of visa restrictions placed on some government members, in response to the "flawed" elections.

The United States has imposed visa curbs on some Cambodian officials over the crackdown and levied sanctions in June on a high-ranking official close to Mr Hun Sen.

It will work to ensure economic growth and fight corruption, said its spokesman, Mr Phay Siphan.

"Good governance, keeping high economic growth and peace and social stability are the goals for the new government," he told Reuters.