PHNOM PENH (AFP) - The eldest son of Cambodian Prime Minister Hun Sen was promoted on Thursday (Dec 20) to the ruling party's permanent committee, an official said, as questions swirl over who might succeed the strongman.

Mr Hun Sen, 66, has ruled Cambodia with an iron fist for 33 years, backed by networks of family-linked loyalists and patronage ties.

His sons have also been tapped for key posts across the country's defence and intelligence establishments.

Mr Sok Eysan said the promotions were made based on the "abilities" of the officials.

"There is no conflict of interest between politics and their professional work," he said. 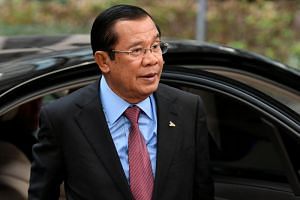 The Prime Minister has long framed the promotions of his children as a natural byproduct of education and training, shrugging off allegations of nepotism.

Gen Hun Manet, who graduated from the US military academy at West Point, is already deputy commander of the RCAF and was recently made the chief of the infantry army headquarters.

Mr Hun Sen's second son Hun Manit is the head of a military intelligence unit and his youngest Hun Many is a parliamentarian who oversees the ruling party's far-reaching youth movement.

Analysts say Mr Hun Sen is grooming his sons as possible successors, but he has also vowed to stay in power for another decade.

The party won all seats in Parliament in July elections after the Supreme Court dissolved the main opposition, further entrenching one-party rule in the country.