PHNOM PENH (REUTERS, BLOOMBERG, NYTIMES, AFP) - Cambodia woke to another chapter of rule by strongman Prime Minister Hun Sen on Monday (July 30), a day after his Cambodian People's Party (CPP) declared victory in a general election that rights groups said was neither free nor fair.

Here's what you need to know about the vote:

Two other parties, the royalist Funcinpec party and the League for Democracy Party, were tipped to have five and six seats, respectively.

But a CPP spokesman said on Monday that Cambodia’s ruling party would win all 125 parliamentary seats.

Official results are expected on Aug 15.

"Compatriots have chosen the democratic path and used your rights," Mr Hun Sen said on his Facebook page after polls closed in an apparent swipe at the opposition, which called for a boycott.

2. WHAT WAS THE VOTER TURNOUT?

More than eight million voters registered for the sixth general election since polls were organised by the United Nations in 1993.

More than 82 per cent of those registered to vote cast a ballot, according to the National Election Commission.

But there were also signs of despondency and indifference, and an expert on elections in South-east Asia said the high turnout was misleading.

"With one-party rule election turnout is generally higher, not lower, because the party, in this case the Cambodian People's Party, relies on voter intimidation more, relies on vote buying more, and turnout should be inflated that way," said Dr Lee Morgenbesser from the school of government and international relations at Griffith University.

3. WHAT DOES THE VICTORY MEAN FOR MR HUN SEN?

With the comprehensive victory, Mr Hun Sen will extend his more-than-three-decade run in power.

He is the only leader that two-thirds of Cambodians have ever known and is Asia's longest-serving leader.

The CPP has won every election since 1998, with Sunday's election returning Mr Hun Sen to power for the sixth time.

Mr Hun Sen has maintained his grip on the country through political and family alliances in the police, military and media. He has placed his sons in key positions in what analysts see as an attempt to create a dynasty.

4. WHY WAS THE VOTE CONTROVERSIAL?

A climate of fear driven by local-level ruling party members has made many reluctant to openly criticise the vote. The election committee, which has been accused of being biased towards the ruling party, said there was no voter intimidation.

Critics say the election was a backward step for democracy in Cambodia following the dissolution last year of the main opposition Cambodian National Rescue Party (CNRP) and the jailing of its leader, Kem Sokha, on treason charges.

That left Mr Hun Sen with little competition and no serious challengers.

Nineteen small - or hitherto unknown - parties competed against the ruling CPP in the absence of the CNRP. But analysts say they are too obscure or new to make a meaningful difference.

The opposition, whose leaders are in jail, underground or in self-exile, urged a "clean-finger" boycott as the only safe form of protest, a reference to the ink applied to people's hands after they vote.

Former CNRP president Sam Rainsy, who lives in exile, said the election was a "hollow" victory for Mr Hun Sen.

5. HOW HAS THE INTERNATIONAL COMMUNITY REACTED?

Western governments had withdrawn their assistance from the election, citing its lack of credibility. 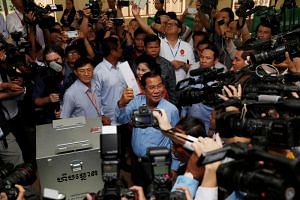 The United States has imposed visa curbs on some Cambodian government members over the crackdown on critics and levied sanctions in June on a high-ranking official close to Mr Hun Sen.

White House Press Secretary Sarah Sanders said in a statement that Sunday's vote "failed to represent the will of the Cambodian people".

"The flawed elections, which excluded the country's principal opposition party, represents the most significant setback yet to the democratic system enshrined in Cambodia's Constitution," Ms Sanders said, adding that the election campaign was marred by threats from national and local leaders.

"The United States will consider additional steps to respond to the elections and other recent setbacks to democracy and human rights in Cambodia, including a significant expansion of the visa restrictions announced on Dec 6, 2017," she said.

Government spokesman Phay Siphan said the White House statement was an attempt to intimidate Cambodia. "This is against the Cambodians who went to vote to decide their own fate," Mr Phay Siphan told Reuters.

The European Union has threatened Cambodia with economic sanctions. Canada's Foreign Ministry said in a statement after the vote that "the election campaign was widely recognised to have been marred by voter intimidation and manipulation of the polls".

However, Cambodia's ally China provided support. When the US and European Union pulled funding for the election, China stepped in with US$20 million (S$27.25 million) for equipment, including polling booths, laptops and computers.

During campaigning, Chinese diplomats appeared at events supporting Hun Sen. The Chinese ambassador to Cambodia spoke disparagingly of the European Union's mulling of further sanctions on the country.

The Cambodian opposition said the result of Cambodia’s general election must be fully rejected by the international community.

“The result announced by the CPP and the National Election Committee must be fully rejected by the international community,” Ms Mu Sochua said.