It ended on January 7, 1979, when Hun Sen, a former Khmer Rouge cadre, led Vietnamese forces into the capital to expel the murderous regime.

The 66-year-old premier hailed the day as Cambodia's "second birthday" at an elaborate ceremony in Phnom Penh's Olympic Stadium, where he was joined by traditional Khmer apsara dancers and marching bands.

"Today we celebrate this ceremony in order to recall unforgotten memories of the most heinous crimes of Pol Pot's group," Hun Sen told the crowd, and thanked Vietnam for saving the country.

The feisty prime minister - who has ruled the country for 33 years - also took the opportunity to revisit history, hitting back at countries which continued supporting the Khmer Rouge after its ouster. 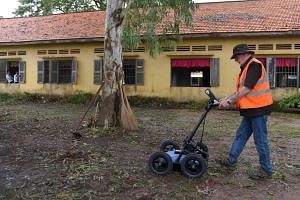 "These countries ... boasted about humanitarian and human rights and democracy (but) unjustly blocked" when the people needed assistance from the international community, he said, without naming any specific nation.

After the regime was toppled in 1979, Hun Sen found his Vietnam-backed government caught between geopolitical forces as the US sought to keep the ousted Khmer Rouge at the table in the United Nations.

The Southeast Asian country in recent years has tilted towards China thanks to loans for infrastructure and few complaints on human rights issues.

Last July, his party won a much-criticised election handily, after his government dissolved the country's main opposition group and jailed its leader - effectively turning Cambodia into a one-party state.

Hun Sen on Monday vowed to "deny the actions of extremist opposition politicians and the foreign circle behind them", claiming that they were trying to push Cambodia from a democratic path.

Critics say Hun Sen's 33-year reign, as one of the longest serving premiers in the world, has created a more repressive Cambodia, where journalists, rights defenders and opposition politicians are routinely jailed for dissent.