PATHUM THANI, THAILAND (REUTERS) - A clothing and cosmetics model and a former monk are campaigning together for Thailand's election at a market outside Bangkok.

The message: Buddhism is under threat.

Their politics marks a new trend in traditionally tolerant Thailand, where Buddhist nationalist movements have never taken root in the same way as in countries such as Myanmar and Sri Lanka.

Buddhism is one of the traditional pillars of Thai society and underpins many aspects of Thai life, but monks have little influence over the state compared to the monarchy and military.

The emergence of the Pandin Dharma Party to contest the March 24 election points to the rise of a fringe of Thai society that is at odds with the royalist-military establishment over religion and expresses growing antipathy to Islam.

"I joined this party because of its policy to protect the religion," said Ms Sirima "Grace" Sarakul, 36, the model, who is contesting a seat in Parliament as a Pandin Dharma Party candidate. 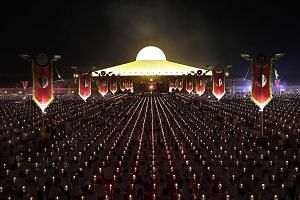 The mess some monks in Thailand create: The Nation

The threat to Buddhism, Pandin Dharma's supporters believe, is from secular authorities they accuse of harassing monks and of caring more about Thailand's tiny Muslim minority than the religion followed by more than 90 per cent of Thais.

"Monks have been dealt with heavy-handedly by the state,"complains former monk Korn Medee, 47, leader of the party whose name means Land of Buddhist Teaching.

"The government has overtly favoured the other religion over Buddhism," he told Reuters.

The government's National Office of Buddhism declined to comment on the allegations or the rise of Buddhist nationalism - saying it was a matter of national security.

Two other avowedly Buddhist parties in the election are aligned with the junta, which has imposed measures to bring Thailand's 40,000 temples under control in the name of tackling scandals ranging from corruption to sex to murder.

"Our party is not even talking about religion per se, but rather about applying the teaching of the Buddha," he said.

Thailand's longstanding political fracture between the establishment and the populism of former prime minister Thaksin Shinawatra is mirrored in religion.

Thai Buddhism itself is divided into two fraternities: the Mahanikaya of the masses and the more conservative Thammayut, bound to the establishment and more influential since its founding by a 19th century king.

"There has been a conflict of interests between factions within the monkhood and the military government," said Buddhist scholar Somrit Luechai.

"As long as the monkhood remains under the centralised control of the state, this conflict will not end and could even intensify."

Religion has not been among the top issues ahead of a ballot which is largely shaping up as a contest between parties that support establishment-backed junta leader Prayut Chan-o-cha and allies of Thaksin.

But an electoral system designed to help smaller parties - 81 are standing for election - has given greater room for interest groups.

Dressed in white to mark themselves out as devout lay followers of Buddhism, Ms Sirima and another former monk, Mr Boonyatilert Sara, 45, found a ready reception in Pathum Thani province, where northern Bangkok's sprawl gives way to rice fields.

"Buddhism has been decaying in this country," said Mr Yuttana Suksa-ard, 66. "A party like this can help purify the religion."

The party wants to formally make Buddhism the state religion and give more support for temples.

"I want to protect the religion and to do that we need legislative power," said Mr Boonyatilert. "In neighbouring Myanmar, the Buddhists there know truly what their religion is and they can defend it. Not here."

Although Pandin Dharma strongly rejects accusations of being anti-Muslim, it complains that Muslims get too much state help.

It wants state-sponsored Buddhist settlements in Muslim-majority southern provinces to aid the return of Buddhists who left because of a decades-old insurgency.

One of the party's candidates for prime minister, Mr Banjob Bannaruji, has praised hardline Myanmar monk Wirathu and in a 2015 post asked: "Will we all succumb and allow Islam to take over the country or do we need Myanmar monks to help us?"

Thai authorities have been tough on monks who express anti-Muslim views - defrocking one in 2016.

But some fear that Buddhist nationalism could also become a threat to centuries-old Muslim communities.

"Before, it was just a bunch of personal animosities against Islam expressed online, but now these scattered movements are becoming more defined," said Mr Zakee Pitakumpol, an academic at Prince of Songkla University and deputy secretary to the Sheikhul Islam, Thailand's Islamic spiritual leader.

The Pandin Dharma Party is contesting only 145 out of 350 seats this time and Mr Korn played down expectations of great success, saying the party did not have enough money for posters and was relying on social media and door-to-door campaigning.

"Even if we don't get any seats, then at least now we have a platform," he said.