YANGON (AFP) - A British teacher wanted by police after his colleague was found dead in his Yangon apartment has fled the country, the Myanmar government said on Monday (Nov 7).

Police said the 47-year-old victim, named as Briton Peter Gary Ferguson, was found dead on Sunday with wounds to his head and chest.

His wife reportedly discovered the body inside an apartment belonging to his 25-year-old colleague and compatriot, Harris Binotti.

Police said the pair, who worked at Horizon International School, had been out drinking on Friday night.

Myanmar's Ministry of Information said Binotti left the country on Sunday, but gave no further details on his whereabouts.

"The defendant of the case left from Yangon International Airport by Thai Airways on the evening on 5 November," it said in a statement.

Elderly neighbour Myint Myint, who lives on the ground floor of the building where the body was found, said she had heard people arguing. 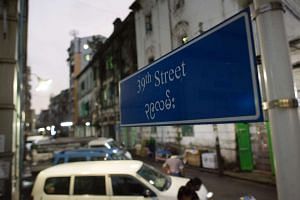 "I heard their cries, saying 'Go, go' but I can't understand the rest as it was in English," she told AFP.

"I heard them throwing things. I think it happened around 4am (on Saturday). Then they became silent."

Horizon International's director of studies said the school had heard the news of Mr Ferguson's death after he suffered a "hard blow to his chest and his head".

But "we have absolutely no idea why this happened", Shahriyor Turgunov added in an e-mail to AFP.

"We haven't heard from Harris, even."

Violent crimes against foreigners are rare in former junta-run Myanmar, whose expatriate population remains small compared to other South-east Asian countries but is growing fast.