While the financial scandal involving state investment fund 1Malaysia Development Bhd (1MDB) grabbed headlines around the world, bread-and-butter issues are expected to top the concerns of Malaysian voters at the next election, said Mr Ibrahim Suffian, the co-founder and director of programmes at Malaysian pollster Merdeka Centre For Opinion Research.

Malaysia's next election is due in August next year, but there is widespread speculation that Datuk Seri Najib could call early polls later this year.

"Top of the mind in terms of what voters care about are the cost of living issues. Those, rather than the 1MDB issue, are the main factors affecting the public mood," Mr Ibrahim told the panel discussion, titled Malaysia's Next GE: The Perils And Prospects, which was held at the OCBC Centre.

"If we ask the man on the street what concerns them, most would say it's the economy. Younger people want jobs that are commensurate with their qualifications, those aged 25 to 35 are concerned about housing prices, and those older are concerned about their retirement and whether they have more than the minimum to sustain themselves," he said.

Mr Ibrahim noted that the Malaysian public has been pressured by rising prices as a result of moves by the government to cut state subsidies and launch a national goods and services tax in the wake of the last election. 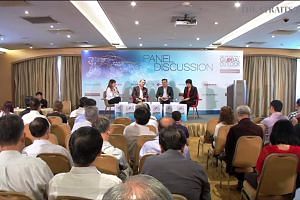 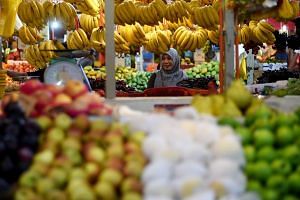 Malaysian economy in good shape but 'watch out for risks'

But even though voters are unhappy with the government's economic performance, Mr Najib is still expected to have a firm grip on power as the largely-Malay electorate are more likely to put their trust in the hands of Muslim-dominated parties such as Mr Najib's Umno and the opposition Islamist Parti Islam SeMalaysia (PAS), instead of parties in the Pakatan Harapan (PH) opposition alliance. The PH alliance groups Parti Keadilan Rakyat (PKR) with the Democratic Action Party (DAP) and PAS offshoot Parti Amanah Negara.

That is because race and religion remain a reality of Malaysian politics, with voters still casting their ballots for parties they believe would be better able to protect their interests, Mr Ibrahim said.

Former Malaysian prime minister Mahathir Mohamad's Parti Pribumi Bersatu Malaysia party will find it hard to gain traction among voters, given they still lack knowledge about the party, which was formed last September. The party will also find it tough to survive without an electoral pact among the opposition members not to contest each other's seats, he said.

"Can the opposition unite? While they can no longer form a united opposition pact, the question is whether they will have the common sense not to contest against each other at the next election," he said.

Another panelist at the forum, Mr Ong Keng Yong, Ambassador-at-Large at Singapore's Ministry of Foreign Affairs, was also optimistic about Mr Najib's prospects at the election.

"People may have their views on 1MDB and the party politics, but if you go by what Mr Ibrahim has said, based on the government performance and the state of the race and religious relations, I don't feel there is enough to shift people away from him," said Mr Ong, who is also Singapore's former High Commissioner to Malaysia.

"I don't think he can do worse than what he did in 2013," Mr Ong added. "The more people talk about religion and race, the more the trust factor comes into play, and Malay voters will stick with what they know, because they don't trust that the other parties will retain what they are comfortable with."

The ruling BN won 133 out of the 222 parliamentary seats in the 2013 general election. The coalition's internal polling data shows it is confident of winning at least 128 parliamentary constituencies, more than enough to return to power, with a higher possible target of around 140.

Ms Selena Ling, OCBC's Head of Treasury Research and Strategy, who was also on the panel, gave her take on the Malaysia economy.

Malaysia, she said, had hit all the right notes in its economic scorecard, with the country seeing strong growth, low inflation and stable foreign direct investment. But she added that the country faces challenges to its fiscal deficit as well as its relatively high government and household debt levels.

“Although things are healthy at headline level... there are all these undercurrents that you have to watch out for,” warned Ms Ling.

The panel is the first of two discussions held in the run-up to ST's annual year-end Global Outlook Forum. The forum brings together experts who will review key news events in the year and the challenges they pose to the year ahead.

The forum is organised by The Straits Times, in partnership with OCBC Premier Banking.